Can India afford the Formula race?

While I am against the globalisation mirage of India, I think that any of us firing the gun from the shoulders of the poor and dispossessed, unless they are specifically the target of discourse, is patently unfair. I can speak only for myself and in many ways all of us who are English-speaking/educated and have access to technological modes of communication can be deemed elitist, at least at the level to access to information and its dissemination. 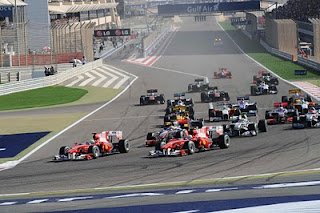 The subject of India’s debut in the Formula 1 circuit is bound to raise the same questions about whether we can afford it. We cannot afford nuclear weapons, we cannot afford branded goods, we cannot afford fancy cars mainly because they hog up space. Who is this 'we', though? It is not a single group.

Let us take the arguments - well-meaning though they are - raised in an email from a discussion group:

It is strange that India, a zero in international sports (track & field, football etc) is to host this most expensive of sports.

Tickets will be priced at Rs 30,000 (£400) for two days. Germany’s ace Michael Schumacher has apparently given his blessings while America’s Lady Gaga (who usually sings and gyrates near naked) has been invited to perform at the F1 event. India elites have long been hungry for the western presence and approval. There is no doubt that the track must have been planned and constructed with total foreign knowhow.

It is true that we do not have a great record in sports, but that is mainly due to the cussedness of sports politics. Our hockey team wins and they are offered a piddly sum as reward. This is supposed to be our national game. How did it come to be so? Because we were good at it, the very best. Those were not days of sponsorship. In cricket, too, we have been fairly consistent, and rather good well before the advent of IPL and one dayers and T20. We have done well in golf, in snooker, in chess, in athletics, in archery, in weightlifting, in tennis, in badminton, and we have climbed mountains. It is not about who has done better. Let us not forget that even a Usain Bolt gets disqualified.

Many of these sports require sponsorship or patronage. Remember Sania Mirza’s training was paid for by a businessman. Most equipment and clothes don't come cheap. If we send shabby-looking players, our internationalists will be the first to object about our ‘image’. Training in many of these games is in fact expensive. Yet, quite a few of our current sports stars had rather humble beginnings, if we look at any major sport. There is a pecking order, no doubt about it, but does it have to do with an elitist sport?

It is far less elitist than horse racing, and not many strive to become jockeys. Yet, every year there are a few prime derby events and it must be said it is the only sport where the gamblers get more prominence, or the owners rather than the real players. Car racing and go-karting appeal to a larger audience, and like any sport test the stamina and skill of the drivers. It is also extremely risky. India has been silently conducting racing events for years now, and the tracks outside Chennai and Bangalore do not depend on foreign knowhow. I happen to know some people and have visited the Sriperumbadur track. The glamour aspect is there primarily because cars are anyway associated with it through advertising. We should be more worried about the number of foreign cars that are entering the Indian market and roads.

If we can get thrilled about Bill Gates coming and lecturing us about philanthropy then Schumacher’s visit is great. We have had some of our own drivers play at the international level. And Lady Gaga or any pop star from any field is an added attraction. When Oprah wants to do India she does not find ordinary people but our celebrities; that ‘gay prince’ appeared twice on her show with full royal regalia making a mockery of our democracy.

As regards ticket pricing, Indians eating out cough up this much at five-star hotels; they attend western classical music concerts which cost a pretty penny; they blow up on several other products, and they are made to feel wonderful when they buy a dinner table at a charity function if Richard Gere attends. The overheads cost more than what the charity gains.

Consider the fact that 80% of Indians have to live on RS 600 a month. They would need to save four years of earnings just to watch a bunch of overrated foreign drivers going round and round the course 60 times. Clearly the event is not for the masses but probably to impress the westerners that India has come of age – it is an ‘emerging power’, no matter that it is a starkly poor and malnourished country.

I am not sure if not having these races will solve poverty. These games are indeed not for the masses, just as reading and writing in English are not.