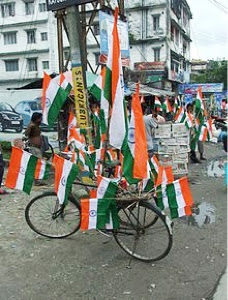 Emotions can be infectious. When one listens to the sound of music, however loud, however remixed, from street corners and shanties, it is difficult not to at least hum along and somehow join in.

Today, it was relatively quiet. There is one 'celebration' spot across the end of the lane, which would be a few meters from my gate. That is where almost every occasion calls for songs. I waited to be awoken. It was only after breakfast that I heard the first strains:

What do we remember most about this song? Ask around. They will tell you that Pandit Jawaharlal Nehru had tears in his eyes when he heard Lata Mangeshkar singing Pradeep's lyrics.

India got independence from British rule; this song was penned after the war with China. The China that ambles across our borders.

This song is a paean to the sacrifices of soldiers. In the past few years soldiers have been killed along the LoC, even when there is no war; they have also been killed by their colleagues or by a gunshot aimed by themselves.

"Jab ghayal hua Himalaya..."? The mountains are not wounded. The wars are between pundits in studios, politicians hawking their wares.

I don't watch the speeches from the Red Fort on August 15th. However, it is interesting to see the reactions. The prime minister is not going there to clear the air or solve the country's problems. There are 364 days in the year. He is, or ought to be, speaking on behalf of the country, not the political party he represents. Unfortunately, that does not happen.

It is no surprise, then, that the wannabe candidate of la-la-land, Narendra Modi, chose to hit out at the Red Fort speech even before it was delivered. He said that at the Red Fort there would be only promises whereas here — in Bhuj where he was addressing the youth of his state — there would be talk about the work that has been done.

We have seen how his devotees (and he is a god whose clay feet they refuse to notice) have the gumption of passing off sleek buses in China as a model of ones in Ahmedabad to show 'development'. So blinded are they that they forget that India does not have left-hand drive vehicles and it is easy to catch the lie. Or perhaps it is audacity. They do not care.

Just as Modi himself does not. Minutes after the PM address, he sniggered, "Media channels said this is PM Manmohan Singh's last speech from Red Fort but he said he has miles to go, which rocket will he take?"

It is not important whether this man understands Robert Frost's poetry. It is a sophomoric dig, and that should tell us a lot more about him than industry-sponsored speeches.

I have just read the transcript of the PM's speech. It is mostly homilies. In a country where people are now battling with disease, illiteracy, and the rupee being worth one-sixtieth of a dollar and onions at Rs. 60 a kilo — we are even gearing to import it from Pakistan (tears without any skirmish!) — Dr. Singh offered chicken soup, not medicine. What we need is not just medicine, but inoculation. If we don't, anyone with ambitions will pose as a healer. We don't recognise quacks easily.

Yesterday afternoon, there were cops near a shopping mall. Lounging on uncomfortable chairs, looking tiredly as cars broke signals and pedestrians skirted cars.

I read in the papers there were 721 sensitive spots. 721 spots in Mumbai alone. 721 spots where terrorists could strike, whereas right under the nose of the cops anyone could have been killed by a passing vehicle with a cocky driver behind the wheel.

How many people earning an honest living would be beguiled by all this and bought things they might not need. Did they think about the freedom struggle? Did those corporates and retailers?

What we get free makes us indebted and enslaved. We are all still colonised in some way or the other by commercialism, bigotry, prejudice, casteism, communalism, elitism. So how independent are we really?