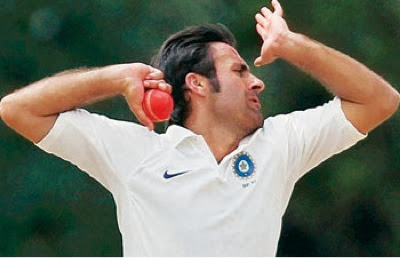 I am glad they left Parvez Rasool out. I am glad because by the act of not sending him — the "first Kashmiri" to represent India — on the field, we are witness to varied kinds of politicking.

On Saturday, Aug 3, India was playing the 5th ODI against Zimbabwe in Bulawayo. We were already in the lead. Of the 15-man squad, Rasool was the only one who was not given a game.

The result was outrage. Why treat a Kashmiri as different when you want him to be India's hope?

Chief Minister Omar Abdullah expressed his anger with his usual dramatic flourish: "Did you really have to take him all the way to Zimbabwe to demoralise him? Wouldn't it have been cheaper to just do it at home?"

The CM is insulting the Indian team, the state he rules and Rasool, especially the latter when he pleaded on the eve of the last match to "give him a chance". Had there been allegations of malpractice or matchfixing, would he have been as quick to ask the team to treat a player from J&K without any favour?

One does not have to think too hard about the machinations and Mr. Abdullah is not the only one.

Kashmiri Pandits who hardly ever referred to Vivek Razdan and Suresh Raina are now emphasising their Kashmiri roots. Clearly, it is one of those 'use the populist sentiment' moments. It is not the same though, for Parvez Rasool lives in Kashmir and, unlike the other two, he has to 'earn' the India cap for reasons beyond cricket.

Does everything in J&K have to do with militancy? Rasool, a resident of Anantnag, has experienced it first-hand. When there were militant attacks in Bangalore in 2009. As India TV reported:

Police along with a few other people detained Rasool, who was a member of his state’s junior cricket team, as they had been staying within the premises of the Chinnaswamy Stadium which became the target of the militants.The youngster was later cleared of all charges and continued with his cricketing career to achieve greater heights.

“I dont want to talk much about that incident...Whatever happened back then is something I have left behind me and followed cricket. Now that I have worked so hard, I have got such good results,” said Rasool.

On the one hand, there is the real issue of the alienation of those from the state, and then there is a hint that even a sop would do. The word sop is not used though; it is called symbolism. That does not change anything. The Times of India said that not giving him a single game defied "both cricketing and symbolic logic". The first being "to test its bench strength in conditions quite different from home against a weak opposition".

This does not sound like an opportunity, but an insult. Experts might differ, but a weak opposition would be like playing at the nets. Besides, the tokenism would fall flat:

It would also have given a player from Jammu & Kashmir an unprecedented India cap, the symbolic value of which could have been huge. Sadly, the men on the spot didn't seem to understand this and nobody higher up nudged them either.

How different would this be from bookies placing calls to swing a match? The BCCI does not, and must not, decide what happens on the ground. And the BCCI is not the government of India. It is the GOI that will ultimately have to work with the state for real decisions, and not mere symbolism. As the report further states:

The first cricketer from J&K team to be selected for the national cricket team, Rasool is also a beacon of hope for players from a region which felt marginalized from Indian cricket's mainstream. By playing Rasool, who is by all accounts competent enough to hold his own against Zimbabwe, the Indian team could have brought joy to Kashmir and given the player confidence to get into the big league.

This is just patronising. Is a Kashmiri only competent enough to play Zimbabwe? If that is a weak team, then how will he gain confidence against bigger players? I read somewhere that his selection was fast-tracked after a good haul against Australia in India.

Kashmiris feel and are marginalised in several areas. And, it may not sound right to say it, but not everyone in the state is looking to represent India in cricket. And not everyone would be crestfallen over this 'picnic to Zimbabwe' because people continue to be killed and have to battle everyday issues.

If only there were sops and symbolic gestures to assuage those.