Of all forms of photography, I am drawn most to portraits. Faces. Forms. Expressions. The result is less about technique and more about what that fraction of a second captures. Is it the essence or the superficial? Does it convey more about the photographer than the subject?

Today is World Photography Day and each of us with a smartphone camera can claim to be quite adept at instant access to what may be loosely termed history in motion. We see it when pictures about catastrophes and revolutions are uploaded. Then, there is the history of ordinary people, which is another story for a sequel.

Now that Princess Diana is back in the news with reports of another twist to her death, one cannot but recall her name without the mention of the paparazzi. Those men — there are few women giving the chase — who will risk life and limb only to snoop on a celebrity getting drunk, or involved in a brawl, or caught in an intensely private moment. They and the celebs feed each other.

However, some famous people do not quite get posterity on glossy finish prints. They are the characters that a camera waits to unravel.

It would be so predictable to mention the portraits by Henri Cartier-Bresson, and I have decided to be predictable. There is a reason: he photographs minds.

It was not easy for him, it would seem, for he had said, “The most difficult thing for me is a portrait. You have to try and put your camera between the skin of a person and his shirt.” 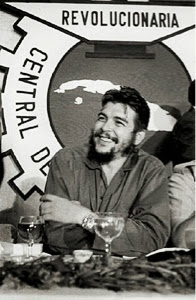 We are so accustomed to seeing Che Guevara in the iconic posters, the pose of angst, of a rebel on his way to rebel, that this smiling man enjoying his spirits — two glasses at that...was there a companion, a comrade, a visitor? — comes as a surprise. It also makes us question our stereotypes. The revolution is indeed on as is evident, but surely a person is not merely one thing?

This is not a great photograph, but it is a revelation. 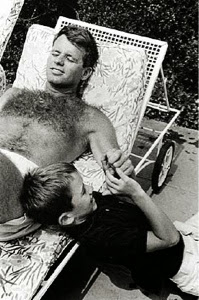 Robert Kennedy lounging on a deck chair is expected. It is the contrast that is brilliant. Machismo against innocence. Or perhaps the innocence of machismo, if we look at Kennedy's almost meditative expression and even the hairy overgrowth that harks back to another age, less sophisticated than his lifestyle. His son seems to want to know what is in the balled fist. There is also a sense of detachment. He is not looking at the boy, who too has his face turned away, although his head rests on the edge of the father's thigh.

The connection established here is of give-and-take role-play. Cartier-Bresson believed, "Photography is an immediate reaction, drawing a meditation."

Carl Jung's portrait is nothing less than a fine piece of meditation. It is not candid and he might well have been sitting for an artist.

His own words somehow coalesce into this photograph: "As far as we can discern, the sole purpose of human existence is to kindle a light in the darkness of mere being."

The use of light and shadow is always interesting and here it adds dimension because of Jung's own conflict theory about the conscious and unconscious. The trickle of light in the background, the ever-so-slight swirl of smoke that stops short of being cocky, the deep furrows on the brow and the compact manner of sitting are at once disturbing as well as almost holy.

For Jungians, this would make a whole lot of sense. And for others, it would still be about a man with several tales to tell. 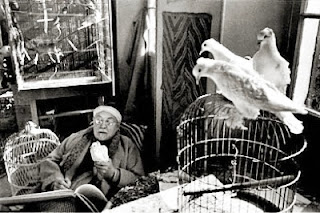 Henri Matisse loved colours, the more lurid the better. Cartier-Bresson used monochrome and even then managed to capture the shades.

This photograph is a bit of a tease. The main subject is not even in the foreground, but he grabs our attention. Matisse loved his still-life, and the birds do look like one of his works. That the cage is empty and they are poised atop it could be seen as the artist's own freedom from using standard templates for his art.

It looks like a scene from a film. This is not Matisse in a typical studio setting with painting equipment. He is surrounded by life, almost bare and rundown. Like a blank canvas in an attic.

These are all famous names and we would have seen them in numerous pictures. It takes someone like Cartier-Bresson to not just transform them into subjects, but real people with more than the single dimension they became known for.

I'll have to answer my own question posed in the beginning and say that in complexity the superficial is also the essence.