Where is Dawood Ibrahim? 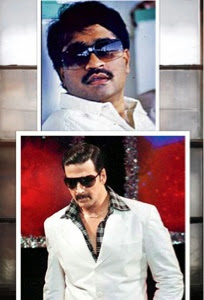 It is the sort of truth-or-dare query that is good for a game. I have been watching promos and there are special 'Shoaib' moments to market the film. What is interesting about it is that the character is based, not so loosely, on Dawood Ibrahim. This is not the first such film, but it has one of the mainstream actors essaying the role. So, does 'Once Upon A Time In Mumbai — Dobaara' have anything to do with the recent spurt of reports on the underworld don?

Perhaps. You switch on the television and on surfing channels you realise how reality and fiction meet. It begs the question: Is it okay to glorify a character, ride on his notorious fame, and find that the news stories are just adding to the hype rather conveniently?

We are all lapping up the stories — news and fiction. The lines are blurred.

Looking for Dawood has an absurdist quality. This time, it started with Pakistan Prime Minister Nawaz Sharif's "special envoy for improving relations with India" (a bizarre portfolio, to begin with) Shahryar Khan. He said:

"Dawood (Ibrahim) was in Pakistan, but I believe he was chased out of Pakistan. If he is in Pakistan, he should be hounded and arrested. We cannot allow such gangsters to operate from the country."

Mr. Khan, for whatever it is worth besides obviously covering up, seems to be concerned about his country. He is not interested in anything beyond that, and most certainly not to help India.

On what did he base his statement? As I've said and what has been reported quite often, Dawood Ibrahim's Karachi residence was revealed in the Pakistani media. The Indian media has all too shamelessly carried interviews with him for years from his "unknown" locations. A scoop seems more important than any other consideration.

The same applies to some politicians and cops. The fact that D-Company, as well as a few other underworld groups, operate with such impunity should be a clear indicator that the intent to get hold of Dawood is just not strong enough, despite all talk. It does not speak too well of our Intel agencies, given that India has fairly good relations with the UAE, where he was a public figure appearing on Indian TV channels.

The argument is that he was not dangerous enough then. Now the situation is different.

How different it is is borne out by the reaction of the Ministry of External Affairs (MEA). Its spokesperson, Syed Akbaruddin, told the media:

“Like you, I too have seen these reports which have been attributed to a senior official of the Pakistan Government. As you are aware, the 1993 Mumbai Bomb Blasts dossier has never been closed by us. Therefore, now that we have received more information about it, we will not rest till those responsible for the 1993 attacks against our citizens in Mumbai are brought to justice, wherever they are. We will continue to pursue this quest.”

What is wrong about this statement?

• Is the March 1993 attacks dossier not closed, although several people were arrested and sentenced, only to get Dawood? This does not quite sound plausible, for Dawood's family resides in Mumbai and he continues to operate his businesses that we get to know about from intelligence sources.

• This is not under the purview of the MEA, but I'd like to emphasise here that those who were targeted and killed in the riots of 1992-93 are also citizens of India. Is there even a dossier on that?

• The MEA is supposed to act in concert with our sources and not what Pakistan chooses to dish out.

It is not surprising that the Pakistani diplomat did not stand by his initial words. As a report said:

However, he later did a complete U-turn on his statement by telling an Indian television channel that he had never known where Dawood lived and his earlier statement was just reflecting what the Pakistani media has been reporting in the past.

The BJP did not want to be left out, so Shahnawaz Hussain declared:

“Thus, the Government of India should pressurize Pakistan. The whole world should put pressure on Pakistan that Hafiz Saeed and Dawood Ibrahim should be handed over to India. Only after that there is any point of any dialogue. Till they don’t get a strong message from India, Pakistan’s morale will not be down. The time has come now that Pakistan’s politician has admitted that Dawood Ibrahim is in Pakistan, why isn’t the Government of India putting pressure?”

Whenever a Pakistani official says anything, please wait. He has denied it, so our responses look foolish. For all we know, the statement could have been a red-herring that exposes how we respond. Across party lines, it appears that we are completely dependent on the Pakistani version.

Why would they hand over Dawood to India? Even Portugal has made it clear that India has to follow the terms of extradition with regard to Abu Salem, another gangster. Dawood would not leave any trace of his involvement. 'Masterminds' don't. So, except for his illegal activities, not much action can be taken.

The BJP should think before talking. It has been 20 years since those bomb blasts. They were in power. What did they do to pressurise Pakistan? Was it not Atal Behari Vajpayee as prime minister who initiated bus services and other measures to mend ways with Pakistan despite 1993?

These hot-air responses have no basis in pragmatism. It is only to add noise to the standard 'war-like situation', each time there is a border incursion or killing of soldiers. Instead of discussing the whole process of covert actions at the border, and how the huge deployment of forces does not seem to inhibit infiltration, we just end up with ridiculous dramatics. (The Chinese manage to cross the border, but it does not get us as agitated.)

The worst was probably a TV channel asking viewers to vote via SMS on whether they thought there should be a war against Pakistan. This keeps the media running and is an advertisement for itself rather than consideration for dead soldiers, the country, or the citizens. There is money involved. Just as there is money involved in keeping the search for Dawood Ibrahim in the news.

While it helps in marketing, it also sanitises the obvious commercial interests and political wishy-washiness.

Waiting for Dawood
Mumbai blasts and selective justice
By Farzana Versey at 2:09:00 pm