Do we sometimes overstate racism? Emphasis on colour in politically-correct terms only consolidates stereotypes. Finger-pointing bad taste draws attention to it. Racism is way more than the buying and selling of products and the imagery associated with them. 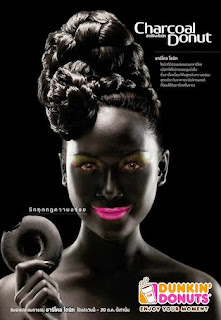 What is wrong with the Dunkin’ Donuts ad campaign by the Thailand franchise? That a female model is covered in dark chocolate, has hair done up in a certain way that makes it appear as though she is black? There have been the usual noises about insensitivity. We are not discussing Trayvon Martin here or people of colour being denied access to space and opportunity. The product is clearly using a particular palette, just as people might paint their faces in shades of, say, the national flag during sports or cultural events.


It took me a few seconds to find this other image by merely searching for white chocolate. If we have a problem with a dark product sold by a ‘black’ model, why don’t we have issues with a white product marketed by a white model? Godiva’s white Kit-Kat has chosen a stereotype, too.

Some reports have pointed out that the pink lipstick stands out and looks bizarre. Advertisements are about drawing attention. It seems like a simple aesthetic placement if we look at the logo. Pink is also about candy, so this is a form of association. A shocking shade would stand out on anyone. What about Naomi Campbell in the ‘drink milk’ promos where she sported a white moustache? What about her posing in those starkly contrasting pictures with Kate Moss?

Dunkin’ Donuts has apologised for this ad, but the owner of the Thai franchise has called it “paranoid American thinking”. It would appear that there is some guilt and discomfort by others regarding portrayal of blacks and racism. On the one hand, campaigns flaunt black is beautiful —another pigeonhole, as I analysed here – and then there is this chariness.

Recently, Oprah Winfrey ‘outed’ a racist salesperson she had encountered in a Zurich mall who told her that the bag she wanted to buy was too expensive. Oprah does not live in a ghetto; her riches are well-earned. She is recognised almost everywhere. Perhaps if she went
to Harlem incognito and tried to purchase a costly thing a black salesperson might draw attention to the price tag. Would that qualify as racism? If not, then what could be the reason? What sort of stereotypes are manifested here?

It is more a matter of hierarchy, or perception of it. I can give a few examples.

• Several years ago, I went into a store in London to pick up some brandy. The woman at the counter snapped, “Not that, it is too much money.” She was of Indian origin and from her deportment and manner looked like a recent immigrant. Between anger and amusement, I figured out that this was something that she could not afford. It was projection. I was a visitor whose cart was filled with goodies. In some ways, she felt slighted and the only manner in which she could to respond was to see that emotion mirrored in someone else.

• In India, one sees even backpackers – white first, then black – given preferential treatment while one is shopping. Although it is more likely that as tourists they are “just looking” and I am the real customer they will earn from, the hierarchy revolts against it. I have walked away quite often after waiting for the shopkeeper to attend to me. However, if there is another Indian who is perceived as less ‘valuable’, then the focus is on me.

• When I took out a $100 bill to pay for a snack at Universal Studios, LA (I didn’t have enough change), the Hispanic cashier almost sniggered, “You got lotsa money, eh?” If that wasn’t bad enough, the black gentleman who was part of the tour group said, “For this much I’d get a full meal at McDonald’s.” Would these be considered racist comments? I did not think so then and I don’t believe so now in hindsight. It is about where we are and who we are dealing with. Cultural baggage is relative.

Covered with dark chocolate or whipped cream, or lips painted a shocking pink, one’s identity is a stereotype too. Unless maliciously used to segregate, it makes better sense to not be numbed by how others perceive us.