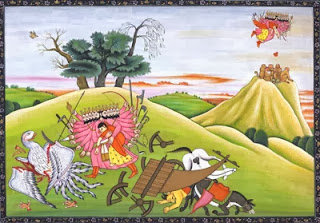 How interesting evil is. It makes all else look good in comparison. Without evil, there would be no concept of good. But can evil exist without good? It is like this: evil does not need something to compare itself with. You can see a wrong as an independent entity, as intent too. The right comes with an inbuilt halo, and there is a tendency to assume that a right thing is also the ultimate truth.

Today, on Dussehra, as the effigy of Ravana is burned, it is seen as a triumph of good over evil. I have attended one Ramlila at Mumbai's Chowpatty beach where the story of Lord Rama's battle with the king of demons is enacted. The costumes are garish, the swords covered with shiny foil. The actors are usually from the villages, and the audience is made up of a largely immigrant population from Bihar and Uttar Pradesh. After casting curious glances our way, they were totally focused on what was so obviously over-the-top performances and looked fake, including crowns falling from heads, silky dhotis causing a few falls.

They guffawed not at this, but at the loud monologues, designed to produce just such an effect. For them, it was all believable. Even though the seats were plastic and so were the emotions. Even though they were munching peanuts and hollering out to old acquaintances from their hometowns. Even though they would return to the one-room tenements they shared with ten others and would report next morning to work in houses, from palatial to modest, or drive cars that cost a fortune or were bought on easy monthly installments.

They did not even want to think about how Ravana was quite a scholar, had the strength to move mountains, and that in some ways by kidnapping Sita he was only avenging the honour of his sister Surpanakha whose nose was cut by Rama's brother Lakshmana.

All this was inconsequential to this audience, as it is to most devotees. For those few hours, they believed what they had been brought up to believe. My understanding is that these people would not be communal. They were happy in their pragmatic devotion, their idols, their calendar with a photo of a deity on a peeling wall. They would not feel the compulsion to compare. They had seen the good and the evil within what was theirs. They owned and owned up to it.

I do not think the burning of the Ravana effigy is imperative for them. As a finalé, yes. Nothing more. As a sidelight, I might add that fire is a cleanser, and is used in certain cultures as such. Therefore, would it not amount to purifying evil? But that does not seem to be the purpose. It is an aggressive act. If we do it year after year, does it not reveal that evil does not die...it does not even get burned to toast? What we do is to beat an assumed-to-be-dead horse.

It is a cosmetic moral victory. The evil within, and the struggle to overcome our shortcomings, is sorely lacking. It is a vicarious thrill to watch a gargantuan ten-headed monster, a caricature of all that is bad, afire and turning to ash. Then we return to other caricatures and stereotypes in our heads.

Our walls have no mirrors. Nothing will burn. There will be no flame. No light.

Image: Painting of Ravana's abduction of Sita, and the bird Jatayu coming to the rescue.