Have we exhausted all options that political parties are fighting over who spoke about sanitary facilities first? If this is a necessity, then go and build those toilets instead of throwing up nonsense.

In his now familiar style of useless rhetoric, Narendra Modi told a group of 7000 students in Delhi:

"My image is that of Hindutva but I'll tell you my real thinking. I have said in my state: pehle shauchalaya, phir devalaya (toilets first, temples later)."

It is not his image that is the problem, but his fake attempts to wipe that image when and where it suits him. Addressing a young audience in the capital is different from repeating these words before the RSS, the Vishwa Hindu Parishad and his own party, the BJP. 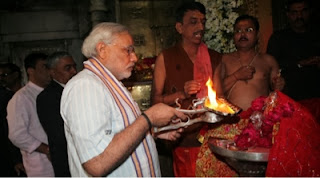 Will Modi say this in Ayodhya? Will he say this while talking to the sadhus who blessed him at the Maha Kumbh? Will he make this into an electoral issue and expunge any reference to temples? Will he be able to sell this idea at the woo-the-minority rallies and add other places of worship too?

It is not only Hindutvawadis who need to use the facilities.

"I define secularism as nation first, India first. Justice to all, appeasement to none. No votebank politics - a poor man is a poor man, where he prays is immaterial."

Why is this only about the poor? The majority that lives in the rural areas have figured out how to use waste as manure. He knows that the poor do not vote if they are promised toilets. They first need something to eat before they can digest it. They need water, they need jobs, they need healthcare, they need electricity, they need roads. They are not looking for a special place to take a dump. Not until their other needs are fulfilled. 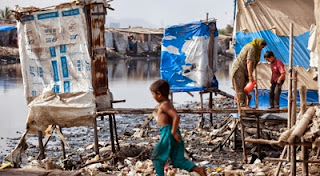 And they really do not spend an inordinate amount of time thinking about where they can pray. They just raise their hands when they want rains, and they fall to the ground when they want the earth to sustain them. They do not need temples or mosques or churches.

Justice is not only about toilets. Modi should know that.

Not to be left behind, the Congress has joined in to claim credit for the toilet idea.

Rural Development Minister Jairam Ramesh is on surer ground here, though. He had said this last year, and now recalls:

"When I spoke, Rajiv Pratap Rudy said I should respect the fine line between faith and religion. Then he went on to say that the BJP maintains that one should not get into the debate of whether a temple or toilet is more important. Prakash Javadekar also attacked me. Activists of the RSS and VHP came to my house and left bottles of urine. I wonder where they are now when Mr Modi has suddenly discovered the value of toilets. I still believe we need more toilets than temples. I wish Modi had discovered this 20 years ago, then we would not have had the Babri Masjid episode."

The point is, has the Congress done anything about those toilets? Talk is cheap.

After the demolition of the Babri Masjid, there were many ideas floated by Indian citizens, not politicians. Among those that suggested building hospitals and schools, some even mentioned toilets.

I personally think this is reductionism. Nobody is really interested in these non-controversial issues unless they are used to promote 'development'. Imagine a basic facility being touted as development. Worse, it is not the ones who are supposed to benefit making the demand, but those with all the amenities. They start the fire and then use the smoke. A stinky smokescreen for secularism again.