Terrorism and the Indian Muslim: 'Shahid' as Apologia 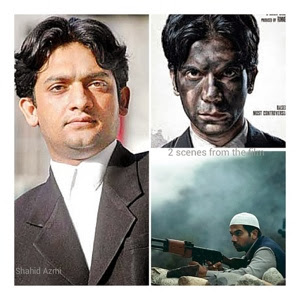 Soon after the first shot was fired in the first scene, I felt uncomfortable. Anything to do with the riots of 1993 produces a pit-of-the-stomach reaction. I have no control over it. However, barely a few minutes into the film and my discomfort was transferred to the manner in which Shahid subtly works the mainstream.

The problem with the ordinary man as hero, or someone who does extraordinary things, is that everything else begins to be seen as a prop to bolster his story.

Those who have witnessed the 1993 Bombay riots up-close might be able to comprehend the issues I have with the film, based on the real life story of slain lawyer Shahid Azmi, whose portfolio comprised mostly of cases of wrongly-convicted or imprisoned men on charges of terrorism.

Except for that one torture scene, the dilemmas are portrayed in a touch-and-go manner. Not only does the film consolidate stereotypes, it comes across as an apologist for the government. Throughout there is an assertion of how wonderful the judiciary is. As the end credits roll, it is mentioned that in his seven-year career Shahid procured 17 acquittals.

While this is factually correct, there are numerous cases that go unheard, forget about getting justice.

The details, as shown in the film: A teenager from a lower middle-class family watches the riots of 1993. He is deeply affected and leaves for Kashmir. Here he gets some sort of training in handling arms. He escapes from there after a few months. Is arrested on charges of being a terrorist. In the seven years of imprisonment, he studies. Once out, he pursues a law degree, joins a firm, quits to start his own practice, starts fighting cases of 'suspects' who are rounded up without a shred of evidence.

And then one day he is shot dead in his office. The end is the beginning.

The premise was open to raise pointed questions, even as it maintained a narrative structure. Instead, there is no sense of commitment, except for mouthing of clichés.

It pained me when I watched it, and it pains me now as I write it, because this film is being hailed for taking a risk. Some have even said how wonderful it is that such a film was made at all.

What kind of a society are we that what needs to be stated as a matter of course is considered an achievement? It is infuriating that we have to accept these crumbs. Azmi's life was in some ways remarkable, but the biopic is not.

It works on the formula of good Muslim. Had this not been a "gritty" film, one would be tempted to recall Karan Johar's celluloid families. Shahid and his brothers are shown as too perfect. They are educated, clean-shaven, and the bearded men they associate with speak gently. I know loudmouths who are not militant. And much as education needs to be encouraged, should we assume that those who do not have access to it are all suspect?

Why does Shahid escape after the riots and that too for training in jihad? This is a horrible indictment, and assumes that those who are affected by such scenes will as a natural course choose to become terrorists.

We do not know what he is disillusioned about. It would have been an important message to understand that such jihad is not a panacea. But the director desultorily goes through the motions of showing a few men wearing skull caps, holding rifles, saying "Allah-hu-Akbar", and preparing for some grand plan that might come their way.

Upon his return to Mumbai, he goes home. He is later arrested because they think he is a terrorist. Resigned to a life in prison, a Kashmiri militant befriends him over games of chess. Yes, the good Muslim Shahid is pitted against the bad one who will use him as a pawn. This is borne out later when a good Kashmiri (the film is ridden with such good-bad ideas, although it does so quietly) warns him about Umar and how these guys just want to prove their superiority and lord over others. He also tells Shahid about how justice takes time, but it prevails. The fact that they are all unjustly in jail seems to be lost on him.

The good Kashmiri is friends with Professor Saxena. (You cannot possibly have a Prof. Gilani or Raza, can you?) They encourage Shahid to continue with his studies, and the professor pitches in with some tokenism about Sher Shah Suri.

Seven years later, the family has moved to a better residence. There is no evidence of anyone having dissociated with his family. This is not the story of many people, as Shahid himself suggests. Then why was this family spared? Because they are not 'typical'?

Shahid joins the firm of a Muslim lawyer. The avarice puts him off, and he starts on his own. I would like to emphasise here that all this conveys that for a young Muslim to be taken seriously, not only does he have to be clean-shaven and educated, he also has to be squeaky clean.

Maryam, one of his clients, is possibly a spark in many ways. Shahid falls in love with her and proposes. That is when she asks him, "You know I am a divorcee, don't you?" There you go. A Muslim woman who probably had 'talaq' said to her three times, and is now bringing up her son on her own. They marry quietly. Why?

When he later takes her to meet his mother he brings a burqa, something she has never worn. He requests her to do so just this once. I fail to understand this. His mother is not shown wearing one, and if he has married without consent, then does he need this? What exactly does the director want us to know? That all said and done, a Muslim woman will at some point in her life have to wear a veil?

The scenes in the court are slightly better, but again the judge is seen pulling up the public prosecutor more than the defense. This sounds rather utopian. At one point Shahid loses it and asks, "Are you trying to say I am a terrorist?" That is the one true moment. For the most part, he does not even use the word Muslim. He says "minority". If this is not a copout, then what could possibly be?

He fights the case of Faheem Ansari, arrested following the Mumbai attacks of 2008 because his laptop had some maps. Shahid starts getting threatening calls. There is no explanation. The silence is a tacit understanding of not taking sides.

One night, Shahid is called to his office and shot dead. His colleague appears for Faheem in his place. It takes a Ramalingam to justify the work of a Shahid Azmi. This is what the film tells us. This is what people tell us. This is how stereotypes work. This is how Indian Muslims get branded. Patronised.

Fine. I am glad this film was made. It just shows us how celebrity parallel filmmakers play the formula and consolidate the stance that the state is always right.

I have been fairly surprised by how the 'populism' of such serious cinema works. To the certified Muslim organisation that has sent this email:

"Go watch SHAHID before it is too late. If you dont have time atleast buy tickets and gift it to some who has. If people are so disinterested, filmmakers wont want to make such brilliant movies again"

I can only say that rather than gifting tickets, acquire the skills and have the gumption to make a movie that tells your story your way, instead of waiting for majoritarian prerogative to speak up for you.

You want to accept magnanimity, and that is the whole darned problem. And you in your elitist hole, there are people who do not need to watch movies to know what they experience.

If on an everyday basis one is taunted as being a jihadi and asked to go to Pakistan, I can only imagine how it is for the people who are rounded up without even the courtesy of a snigger.

I did not need this film to get me thinking. I have done so publicly since 'Bombay', then 'Fizaa' and later the execrable 'Black Friday'. My analysis of the last one is here.

It is no surprise that quite a few 'secular' people, even among Muslims, would want to applaud the film. It is their choice. Just do not expect me to fall for any and every gesture of some 'pathbreaking maverick'. I can turn around and say that I have posed queries that are not in the domain of either popular or even much of offbeat ideas. How does such hat-tipping matter when you are being handed over little bites of predigested bitterness?

What I write is to challenge the reader as much as I am challenged, though not by this film because it plays too safe. But do not tell me that the questions a film/art/book/thinker asks are the final questions and the ones I ought to ask too.

The performances were uniformly above-average. But I cannot bring myself to see it as just a film. Here is the official trailer; what I have written will not come through here: