The pose and the mosque 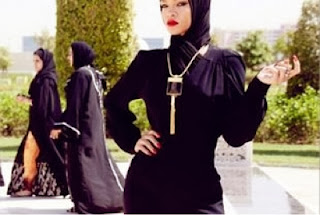 Why was Rihanna posing for pictures at the Sheikh Zayed Grand Mosque in Abu Dhabi? Some are likely to titter over the accusation of "inappropriate" or “indecent pictures” that made the officials ask her to leave. Nobody is bothered about one simple fact: she was told to leave before she posted the photographs online. She was going against visitor protocol prior to the religious one.

However, one cannot nitpick about some things, such as when model Claudia Schiffer had Islamic verses on her dress at a ramp show. Indeed, there was a reaction to that as much as there was to Madonna using Sanskrit shlokas in a song or images of the Virgin Mother or the Buddha being commercialised.

But, every place has its cultural requirements, and a place of worship is not meant for 'posing'. I include politicians and celebrities doing so at various shrines, seemingly in a fit of adept fervour, but in reality to get mileage and publicity.

She was on a tour in the UAE, so clearly she must have seen people in various kinds of clothes, including western wear, at her performances, in her hotel, at clubs. These include women from some Arab countries. So, why did she have to mimic a veil, by wearing a hooded jumpsuit?

If anything, this is offensive. This makes some people laugh at 'indecent' (put in single quotes). She, in fact, appears to be smirking at some of the other women. It is insensitive, and insensitivity is indecent.
By Farzana Versey at 8:18:00 pm