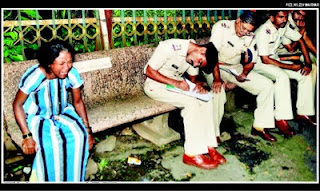 Even before reading a word, this photograph completely shook me up. A woman crying in obvious desperation and a few cops sitting on the same bench, but keeping their distance and going about their job without a glance towards her. What more could express her loneliness and helplessness?

Who is she? I still do not know. The caption in Mumbai Mirror says:

"The mother of Prakash Salunkhe, 14, who was killed by a leopard on his way back from school on Friday, breaks down at the hospital after receiving her son's bloodied body"

Her identity is just that of the mother of a bloodied dead body. I look with discomfort at a cop's bright shoes, and the floor that seems to have congealed remnants.

The fact that it is in the newspaper, front page at that, does mean that in the noise of politics and cult figures the story has been covered. Leopard attacks on children in the Aarey Colony area are not uncommon. It is also not fair to dismiss the reaction of the cops based on what has been captured in a second. They were probably paying attention to her earlier, and could be taking down details about her son.

That is not the issue. It is about us. About how callous we have become to things around. There would be many times when we would be sitting like those cops, not too far, from people suffering. And we would do nothing. And, sadly, at that point in time we would be as helpless as this mother. For, somewhere, without trying to justify the looking away, it is true that we don't do anything because we just can't.
By Farzana Versey at 6:39:00 pm