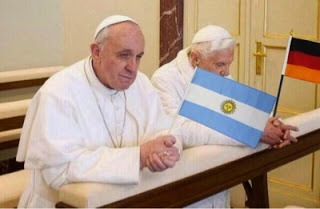 I have not watched a single World Cup football match this year. Among the slew of trivia surrounding the players that often overtook the games, the best one has been left for the finale.

Will the Pope root for his home country Argentina and would this be in conflict with his predecessor, a German? After all the society type gossip about hairstyles, shoes, girlfriends, and lookalikes, and that goth moment of the Suarez Bite, the finals between the two countries have found a new niche.

Pope Francis has shown that he is quite worldly-wise and not confined to the Vatican. The media is discussing whether he will be pitted against Pope Benedict XVI who is living in retirement now. Both are said to be football fans. According to Christian Today:

Some are cheekily suggesting that it will be a testament to who is the greatest pray-er, and perhaps even who enjoys the highest favour with God.

Sports do have the same appeal, and demand obeisance, as religions. The sounds from the stadium have an effect similar to mass elation or grieving during defining holy festivals or moments. The players have a cult following, and their posture during a winning or losing strike is quite like one of prayer. In fact, it often is a prayer.

The website calls it "the holiest World Cup final yet". One assumes other World Cup finals had their holy moments, or perhaps all such games have divine provenance. Where did Diego Maradona's "hand of god" come from?

Now we have the more urgent: "The question is: who will pray the hardest?" One might have questioned the almost direct intrusion of religion in sport, but the pope vs. pope imagined skirmish sounds like harmless amusement. And it is unlikely that those rooting for either team will do so for their papal affiliations. It's not like we are talking about Mick Jagger!