NSA spied on BJP to spy on Congress? 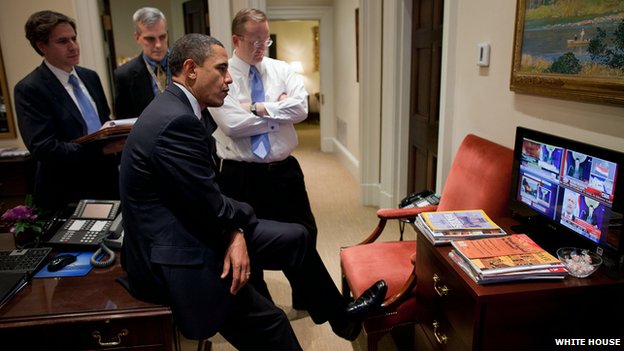 What exactly does the NSA spying on the BJP amount to? Is the target the office of the political party, or its senior leaders, or media cells, or its workers on the ground? Or, was it using the enemy of the 'enemy'?

The latest disclosure by Edward Snowden has got the Indian government in a tizzy:

That the omnibus spying programme by the US National Security Agency enveloped 193 countries (including India) comes as no surprise, but what is striking is that the Obama administration in 2010 sought authorization from the shadowy Foreign Intelligence Surveillance Act (FISA) court to conduct surveillance on BJP among six political outfits worldwide. Others listed in Edward Snowden's disclosure of the NSA operation are Amal of Lebanon, an outfit with alleged links to Hezbollah; the Bolivarian Continental Coordinator of Venezuela, with purported links to FARC; Egyptian Muslim Brotherhood; Egyptian National Salvation Front; and Pakistan People's Party.


The PPP and BJP seem like misfits in this group. The former, in fact, had a fairly charmed equation with the US authorities, and although Narendra Modi was denied a visa, there would be no reason for the Obama government to snoop on the party. Some have suggested that it was based on Rahul Gandhi’s 2009 conversation with the then US ambassador Timothy Roemer that Hindu terror was “the bigger threat (to India) may be the growth of radicalized Hindu groups, which create religious tensions and political confrontations with the Muslim community”. This is apparently in comparison with the LeT.

Why would the US toe his line? America has a lot to gain with its ‘war on terror’ that is exclusively jihad-driven because those regions ensure profiteering. Paranoia over Hindu terror would be a waste of time, for India does not offer any tangible benefits (the Americans have been busy patenting tulsi, and yoga and spiritualism are now a part of their culture).

The NSA acted in 2010. The BJP was not in power, nor was there a major riot immediately prior to it. Even if there was, it is not the business of any other country. If anything, the BJP could have been “of valid interest for US intelligence” to get information about the ruling Congress Party, the whispers, rumours, and details about scams that the government would probably want to hide, and the opposition parties keep notes of. As reported, the Congress had raised objections about the spying last year. This is not a matter of which party is targeted, but of the country. The BJP ought to have raised the issue then along with the Congress, just as the Congress should join forces now.

“Some of the information they (the US) got out of their scrutiny, they were able to use it to prevent serious terrorist attacks in several countries.”


Did the US administration share such information with the Indian government? When has the US ever tried to prevent terrorist attacks anywhere? It only lands up later, adding to the mayhem.

Only four countries were off-limits from the snooping: loyal allies Britain, Canada, Australia and New Zealand.


If terrorism is the main reason, then these countries are home to immigrants. Would the hosts not be at risk, if one goes by western stereotyping?

The US also got authorisation to spy on international non-government agencies – the United Nations, European Union, World Bank, International Monetary Fund, Asian Development Bank – that it anyway twists to suit its political agenda. With key tactical information, it can cause a good deal of covert harm. The Indian response has been tepid. There is greater concern about how this will pan out, as Modi and Obama are to meet at the end of September. It sounds wicked to say so, but perhaps they would like to share notes. After all, the Indian PM is known to spy on his partymen, and Snoopgate did not appear out of thin air. And while this may sound like a conspiracy theory, the timing of the leak is just right. It will give them time to indulge in some real diplomacy after the earlier embargo on Modi. This is an unusual ice-breaker, but given that Angela Merkel could condone the spying Modi will just grin and bear it.

Meanwhile, the official channels are bureaucratic with their “summon a top diplomat” and the sophomoric “India also sought an assurance from the US that it will not happen again”.

There is a lot that happens that might not be in the realm of WikiLeaks knowledge, and it is unlikely to stop. The only way to get on top of this is to have our own intel agencies so smart that they can snoop on the snoopers.