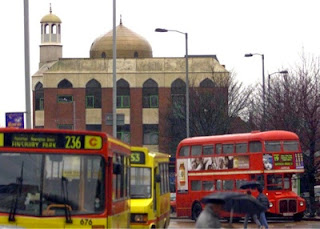 Why is HSBC closing down the accounts of its Muslim clients in UK? Is it connected with where their sympathies lie on Gaza? On July 22, a few prominent organisations got letters saying that they have until September 22, after which they would not be permitted to bank with them because the services "now falls outside of our risk appetite".

They are solvent, and owe the bank nothing. So, what is it and why the pregnant-with-meaning "now"? According to the BBC report, the bank has said:

"Discrimination against customers on grounds of race or religion is immoral, unacceptable and illegal, and HSBC has comprehensive rules and policies in place to ensure race or religion are never factors in banking decisions."

They have an alibi in "poor money-laundering controls". This should be their lookout and not of those who have no such history.

"The bank didn't even contact us beforehand. Didn't give us a chance even to address [their] concerns. For us it is astonishing - we are a charity operating in the UK, all our operations are here in the UK and we don't transfer any money out of the UK. All our operations are funded from funds within the UK."

HSBC is being irresponsible. It could not be because Abu Hamza, who was earlier in charge of the mosque, was convicted of terror offenses in the US. He was not with the mosque since 2005. Nobody is trying to hide anything. In fact, Mr. Kozbar said:

"The positive work we have done since taking over over from Abu Hamza to change the image of the mosque, there is nothing really that can explain [HSBC's decision]."

Ummah Welfare Trust has a more real Gaza connection. The letter from HSBC-UK said, "You will need to make alternative banking arrangements, as we are not prepared to open another account for you". The Trust has become defensive:

"We make sure we go out of the way to work with organisations that are non-partisan. What we do now is we do a check on Thomson Reuters and make sure that there is no link whatsoever with blacklisted organisations. We don't want to damage our relief efforts. We have tried our best to be non-partisan as much as possible."

A Trust has a right to choose its beneficiaries, and in Gaza they don't have to be balanced because Israel is getting enough from the West. Who is deciding on the blacklisted organisations that benefit, and what are the yardsticks to gauge that?

The Cordoba Foundation, a Muslim think tank acting as a link between Europe and the Middle East, and Anas al Tikriti who runs it, his wife, and two children have all separately received letters of closure without any reason at all. He said:

"It is unsettling. I am not used to being addressed in those terms. It's like I have done something wrong. The involvement of my family disturbs me. Why the entire family? I can only speculate - and I wish someone from the bank could explain [why the accounts were closed]. The organisations are mainly charities and the link is that many of them if not all of them are vocal on the issue of Palestine. It would be a great shame if that was true. As I'm left to speculate, that's the only reason I can come to."

HSBC-UK is doing something patently wrong, not only to its clients but also to itself. Had it provided a reason, however vague, it would still have some ethical leverage. If non-Muslim organisations have been told about closures, they would have had similar complaints. Where are they? Are they being circumspect, and if so why?

A sharp Op-Ed in Forbes blames it on "some discreet pressure from the American authorities (or the possibility of it in the future)". It also points out the hypocrisy:

"Whatever the youngest Mr Tikriti has been spending his pocket money on, it’s hard to believe that a small boy falls outside the “risk appetite” of Europe’s largest bank. And especially a bank that was, until recently, perfectly happy with the business of Mexican drug cartels, allowing them to launder their money through HSBC accounts in the Cayman Islands. Not only that, but the same US Senate committee that fined HSBC $1.9bn in 2012, also questioned the bank’s dodgy links with financial institutions in Saudi Arabia that, they believed, were responsible for funding terrorism."

Is the bank more concerned with its financial interests?

Nicholas Wilson, a HSBC whistleblower and UK-based financial activist, thinks so, and believes that is the reason for its pro-Israeli stance:

“HSBC has a bank in Tel Aviv and have held a licence there since 2001. They claim on their website to be the only foreign bank in Israel offering private banking. It could therefore be possible that they consider being seen to bank for pro-Palestinian organisations puts them in conflict with their ambitions in Israel."

What HSBC-UK is doing is passive-aggressive at different levels.

• By not giving a reason, it is being non-committal while at the same time expecting that the 'banned' clients come out with their own doubts. This will, the bank and its masters hope, expose them. Once their social and political affiliations are exposed, they can always use that to hit out at them. It won't be past them to suggest that money laundering is done through those tunnels of Hamas.

The Charities Commission has confirmed that it is not investigating any of the organisations involved and says that if the charities don't have a relationship with a bank it could harm public trust in their work.

Targeting specific organisations will ensure a slow death of many of them, thereby pushing them out of the mainstream.

• Bringing young family members into the picture is the absolute low in stereotyping. It can have a psychological impact, and these youngsters might be forced to either protest (and oh the West knows how they will protest) or retreat and stop being "partisan". It is another matter that in their school other kids can take sides.

It comes down to just one thing: You can only be on the side that is decided for you.