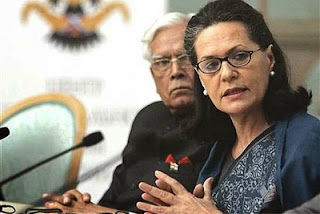 Natwar Singh is right about one thing: Sonia Gandhi should have kept quiet. The one-time Congress loyalist and senior minister has written his memoirs in which there are some unsavoury references to the Congress party chief. Irrespective of whether he wrote it out of bitterness (he was made to leave after the oil scam), it would be quite a natural thing for him to talk about his tenure in the government, and it might include his perspective on the people he was interacting with.

"I will write my own book and then everyone will come to know everything... the only way truth will come out is if I write. I am serious about it and I will be writing."

This is disturbing. It assumes that her truth is truer. Just as there are people who will not buy all of Natwar Singh's 'truth', there will be others who would question her version. The one incident that seems to have had an impact is that she refused the prime ministerial position not because of the "inner voice", the touted reason, but because Rahul Gandhi gave her 24 hours to refuse because he thought she too might be killed like his father Rajiv Gandhi was.

To any observer, both seem relevant. A son wanting to protect his mother is a most natural emotion, and a woman cast as an outsider might realise that this space has its own niche and abjure overt power. A good sixth sense, or inner voice, has saved many.

She is a politically pragmatic person. As I wrote in The Accidental Prima Donna:

While her slain husband and two children were hesitant to enter the fray, Sonia Gandhi was never a reluctant politician. Her refusal to be the prime minister was also a political act that stood her in good stead. Indians connect emotionally with detachment. She came across as one not ambitious for herself.

Therefore, the Natwar natter would have just fallen by the wayside had she not responded. Now, people with some sense will expect a sanitised book from her. They will read it, but might doubt its veracity even more. For, if he is a "bitter man", then she is a defensive woman. Such statements make it only worse:

"I can't be hurt (by revelations), I have seen my mother-in-law riddled with bullets, my husband dead...I am far from getting hurt with these things. Let them continue to do this, it will not affect me... They can continue to do this if they so please."

By saying this she has exposed her hurt more sharply. Which secure person would in a flash decide to write a book to clarify their own position? And why is former PM Manmohan Singh saying, "Private conversations should not be made public for capital gains"? An expensive book in English reaches a limited number of people.

Dr. Singh probably does not like the fact that he is portrayed as someone who had no real power, and all files went to Ms. Gandhi. In retirement he would want to salvage his reputation. Circumspection is a good thing, but responding to the rash isn't particularly circumspect.

The Congress Party members will all huddle together anyway, and certainly not protest against their leader only because she listened to her son. If anything, they will see him as someone who has real influence on her and is therefore the leader they believed he ought to be.

Natwar Singh quit the party only in 2008; he was forced to resign in 2005 for the Iraqi food-for-oil scam. This itself is revealing. If he was bitter, why did he not leave the party immediately or prove his innocence then, as he claims now?

It would take naïveté of some kind to blindly fall for his interpretation, especially if he comes up with statements like these:

"No Indian would treat a man who was loyal to family for 45 years who had been very close to her and 30 years older. .... It is just not done in India. There is a part (of Sonia) which is ruthless."

Asked if that was her Italian part, he shot back, asking what else can it be adding, "some part of it is not India. Jawarlal Nehru, Indira Gandhi, Rajiv Gandhi would not be like that".

He is sounding like a political rookie, treating this as some sort of soap opera. By emphasising his loyalty he is inadvertently justifying her arrogance that he seems to have issues with. The India of his imagination is certainly not real. Age is not respected even in everyday social situations; in this case it was professional. His insistence on making it unprofessional is grating and obsequious, for ultimately he is holding a candle for most of the Nehru-Gandhi family even if it means ignoring their ruthlessness.

Natwar Singh also needs a quick visit to Italy to discover how they uphold family values. Or he can just get DVDs of 'The Godfather' series. The Italian mafia too respected the unit. In Don Corleone's words: "A man who doesn't spend time with his family can never be a real man."