A Fasting Muslim and the Shiv Sena 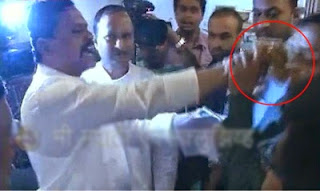 Who would have imagined that the humble chapati would take centre stage in politics? It is on national television in the form of grainy images of a beefy-looking man forcing another man to eat it. They are no ordinary men. One is a Shiv Sena leader, the other is a fasting Muslim. Being Muslim is tough enough; a fasting Muslim seems to be even more of a dangling identity.

However, I'd like to ask whether it is only the Shiv Sena that is using/abusing or capitalising on this identity. To get to the story first:

A group of around 11 Shiv Sena MPs, apparently angry over not being served Maharashtrian food, allegedly forced a Muslim catering superviser who was fasting for Ramzan to eat a chapati at the new Maharashtra Sadan in Delhi last week. Within hours, IRCTC, the Indian Railways subsidiary that was catering for the Sadan, stopped all operations in protest, and complained in writing to the Maharashtra Resident Commissioner, saying the employee, Arshad Zubair S, had been “deeply pained and hurt… as religious sentiments are attached”.

Would this have become news had it not been a Muslim at the receiving end? Unlikely. And the tone would have been vastly different. What we see now is bluster from all sides, and Mr. Arshad who might have certainly felt violated in some way will have to go along with the "hurt sentiment" politics because he is only a pawn. In his complaint, he said:

“All the guests along with media reporters and staffs of Maharashtra Sadan got into kitchen where I was getting the orders prepared. They caught me and put the chapati into my mouth. I was wearing a formal uniform set as prescribed by IRCTC and everybody in the panel also knew my name as ‘Arshad’ as I was wearing the name tag. Even then they inserted chapati in my mouth which caused my fast to break on the eve of Ramzan. I was hurt with the thing they have done as religious sentiments are concerned.”

The hurt should be over such physical abuse, of forcing anybody to eat anything. The Shiv Sena is communal. It is obvious that those MPs deliberately made him eat, although they knew he was fasting. They had problems with other facilities like electricity, so would they give shocks to the person in charge? Why did the media keep quiet if they were present then? This is being projected as protest against catering vs. religion now.

The incident occurred a week before it was reported. Did it take the authorities seven days to figure out what happened and what hurt was involved? Worse, we are ignoring the issue of damaging of property, parochialism and arrogance of power that the episode is also about, even if there is no story in these.

The MPs were throwing dish covers and threatening the staff. What kind of behaviour is this? Why was there no police complaint immediately, which gave leeway to the officials to cling on to the moral dimension of a fasting man?

The MPs want a Maharashtrian caterer, citing other state bhavans as an example. Arvind Sawant said:

“The food at the Sadan is terrible...They even gave stale water. We wanted to sort these issues out amicably, and did not come with the intention of committing violence. But even on that day, the Resident Commissioner refused to meet us, and after a lot of delay, said that he had gone to receive the Chief Secretary at the airport. Is that not an insult? No tod phod happened at all, but we have been provoked in a sustained manner. Nobody was manhandled, but if you keep abusing, will someone not slap?"

I am quite flummoxed about "stale water". But it is important to note that while denying that any unruliness took place, he is justifying it. The mob wrote "Jai Maharashtra" on the walls of the Regional Commissioner's office besides the behaviour mentioned earlier.

The Shiv Sena often talks with its hands. However, this incident could also be about its political equation with the BJP for the coming assembly elections. Using one chapati, they have raised their 'concerns' before the ruling party:

• The North vs. Marathi maanus
• Violence as legitimate means
• Role of regionalism
• Muslims as religion flashers

All these happen to be the BJP's favourite subjects, too. Therefore, who will benefit the most from emphasising the religious aspect? Or, should we ask, who is bailing out whom?