The nation’s highest civilian honours are announced on Republic Day, and as always there is cause for heartburn for those left out and amusement to onlookers.

10 per cent have been hogged by outsiders – yeah, expats. We’ll get to them in a minute.

Here are the awards: 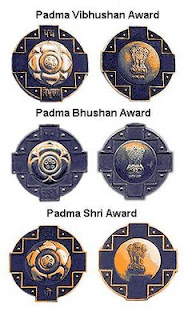 What is Farid Zakaria’s achievement when compared to the years of work by artists Akbar Padamsee or Ram Kumar (they have all got the Padma Bhushan)? Is it important to choose someone from particular fields? Think about how Sitara Devi was constantly sidelined and refused to accept an award not in keeping with her stature. I’d say all this does not matter, but these are public figures who have contributed a lot to their field, at times exceptionally so.

In a nation that prides itself on being on the go we could not find a worthy candidate who could be a jewel, a Bharat Ratna? That should make us ashamed and stop bragging.

It is not surprising that the Nobel, Magsaysay and Oscar winning guys will take away the Padmas too; they have to because India needs to prove that we also celebrate what they do.

This brings us to the most controversial award-winner this year – US-based hotelier Sant Chatwal. He gets the Padma Bhushan in the field of public affairs. As far as we know running hotels is indeed a public service, but that isn’t what the committee thought about. He has been a fund-raiser for the Democrats, primarily the Clintons. Hillary Clinton is Secretary of State. Let us not forget for a moment that political considerations always work.

You perform a surgery on a bigwig, you interview him, you clean his cupboards but do not wash his dirty linen and you have it made.

I think Sant Chatwal deserves it. He is the successful face of our country we’d like to show; he is from a minority community, he pushes the royal Indian version when his son gets married and makes us look like a land of elephants, which we indeed are. It is really bridging the gap between the traditional and the modern that is so important to us, although we have no idea about what really traditional means and what modern means. For us, tradition is ritualistic and modernity is of course westernisation.

There is no need to be surprised. Why is everyone mentioning the cases of fraud against him now? As though the awards committee does not know. He is our man in the US, and we need our men in the US. Sant Chatwal has been offered a lollipop to keep him happy; his happiness will spill over and fill the coffers of that huntress Hillary and we might get a little pat on the back for being tough on terrorism.

As on every such occasion, we were warned about attacks. The security agencies were also examining the tunnel on the border. This tunnel must have been a real quickie. Anyhow, I hope our guys were more prominent in the Padma lists; their getting awards for bravery is different.

Former CBI chief D R Karthikeyan, who headed the SIT which probed the Rajiv assassination case, has also been selected for the Padma Shri award. Now? Time to wake up.

I think there should be bidding for these awards. Really.

Can someone please tell me since when has Mile Sur Mera Tumhara become “The song of India”? It is about India, about promoting its “multi-culti”, in Naipaul’s words, but who decides on something being the song of a nation? And if it is, then why has it been revamped to look like a cross between a Bachchan-infused Mani Ratnam film and an ad for Lux soap?
By Farzana Versey at 7:24:00 pm