When the swine get you swooning

Can you imagine Indian President Pratibha Patil saying that tur daal is good for mating or Asif Ali Zardari voicing his approval for magaz (brain) masala as aphrodisiac?

The Argentinean president has no such qualms. She is all for bacon in bed. Cristina Fernandez was speaking to what reports refer to as the “swine industry” representatives. So charged up is she over how pigs set the hormones aflame and the adrenaline to rush that she has even offered subsidies. 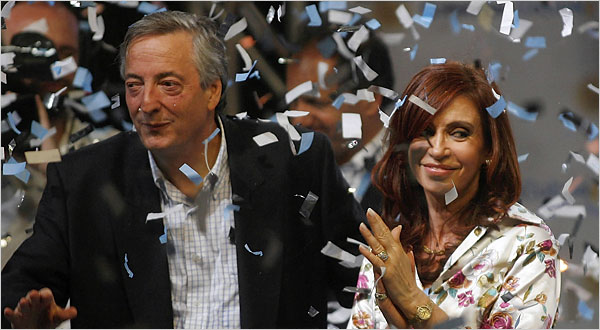 The climactic moment with hubby...when she became the first woman president
Her testimonial goes something like this:

“I didn’t know that eating pork improved sexual activity. It is much more gratifying to eat some grilled pork than to take Viagra.”

Now she knows through some pig-sty activity with her hubby, the former Prez, Nestor Kirchner. I think there is some feminist type lesson here. Men take Viagra. Therefore, it is men who will eat grilled pork. (I am assuming baked, fried, sautéed or raw are not as effective, or perhaps it is only a matter of taste.) Does the onus fall on men to not only perform in bed but also in the kitchen? If not, then does the woman cook it? Does she too partake of it? Having had their fill, both at the table and on it, is it possible that the male, being handicapped due to physical reasons, peaks less and the woman needs to channelise it elsewhere and finally does reach the top? Maybe even becomes president?

Argentina is traditionally a beef-eating nation and there are already discussions about how cows will be put to pasture and sheep will be left to graze, contributing precious little to the citizens’ culinary and carnal appetite.

The pork guys are happy. Said one of them:

“In Osaka, Japan, there is a village in which the people who reached 105 years old and ate a lot of pork had a lot of sexual activity.”

If the village is an example, it could mean that pork, like all red meat, adds loads of calories. But before the calories can make a home in the body, they are quickly burned off by sexual activity. Since people are kept busy and after a certain age do not have to worry about procreating, they enjoy themselves. There is less stress, more desire to live, so they live longer.

Can this module be replicated in other parts of the world? I mean, man on Wall Street downs a super large pork burger, calls up his partner at the university where she teaches who is slicing into a neat chunk of ham; they meet for a quickie, go back to stressful work, return late, down burger/chunk/whatever, try out some stunts, dream about the market crunch and academic crap. They are stressed as hell and will soon give up. On each other. Or, on the pork.

Sexy swines
It doesn’t quite work like Osaka. But it’s a nice thought that pigs may not fly, but could help humans to do so.

One more thing: Jews may be super rich and super smart and Islam may be the fastest-growing religion, but, sowy, being kosher will not get them far.

PS: Are the Viagra manufacturers going to announce a fatwa and place a price on the presidential head?
By Farzana Versey at 1:41:00 pm

Email ThisBlogThis!Share to TwitterShare to FacebookShare to Pinterest
Tags: analysis, animals, feminism, let's not get too serious, politicians, sex