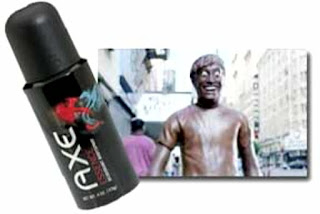 This guy has been using a deodarant for seven years but as he rues, "No girl came to me." He sued the company.

Deo ads are in trouble in India at the moment for being suggestive and showing " women lustily hankering after men". The ads also "brim with messages aimed at tickling men's libidinous instincts".

If there were no deos men would not get tickled?

There is no escaping these ads but they are quite humorous and will work on adolescent boys. I mean, to tell us that Axe is now offering more we get to see the bottle's phallic-like head growing. If they'd have shown a man's wallet or his mind displaying similar growth maybe it would have some effect.

It is pretty hilarious to watch some guy spraying himself and suddenly women go all pouty, eyes glazed and follow him. This is more Pied Piper than serious sexy.

And what is wrong with women getting attracted to men? Don't we see ads where men eye a woman for her clothes, makeup and how she even manages to do well at her job because of some talc?

And what about the ad where a woman makes carrot halwa with some readymade mix due to a last-minute demand by her husband who is bringing home his boss and colleagues? This too can be construed as hankering.

We see ads of men's underwear - so who are they appealing to? Saif Ali Khan does a joker on the track laidback act and reaches the finish line before the athletes. Duh. Any sensible female would notice their toned legs rather than this guy's Amul chaddi that needs a dhobi, not a woman.

So, please don't worry about women. The only time they swoon is when they feel light-headed. Or when they look in the mirror.
By Farzana Versey at 12:39:00 am