Of Navroz and Nostalgia 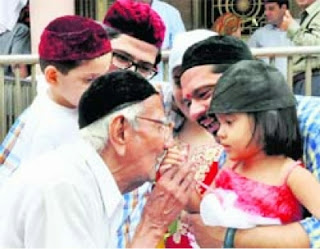 I love new years. It does not matter who is celebrating it. There is a sense of renewal. As I opened my first box of sweets today, a gift of Navroz, the Parsi New Year, I could not help but rewind.

Since my memories are the same, do indulge me as I reproduce this piece I had written long ago...

Jimmy was driving me to his house; he would park his car in the building and then we’d take a train from Grant Road station to Vasai for a case we were following up on. On the way up to his flat, he warned me, “Look, I live with three aunts and I rarely invite any woman over because they start imagining I have been hooked. So, just don’t mind them.”

Three ladies in different stages of moisturised wrinkles appeared together to greet me. Jimmy went in. Ebony-coloured furniture was displayed discreetly. Lace-trimmed napkins came with the tea. The house smelled of talcum powder. The three of them sat across in stiff organza sarees and kept smiling.

Jimmy returned and was immediately given a special look. He rolled his eyes and suggested I hurry, but it would be better if I freshened up as it might be a few hours before we returned. I got up hesitantly and was directed towards a room. All three aunts followed. It was the bathroom attached to their bedroom. One of them brought out starched towels from a locked cupboard. I tiptoed in and was afraid to even let the water in the washbasin run lest the sound break this amazing silence.

As I stepped out all of them were sitting at the edge of their bed facing the bathroom door. I thanked them and they asked me to join them for lunch another day. “Bye-bye, bye-bye,” they chorused as we left. Jimmy breathed out, “I live with them!” Three spinsters and a bachelor, all past what is deemed by society to be the marriageable age.

“Feedosssssssss!” That is my earliest memory of Parsis. There would be a scream in our house on spotting a perfectly harmless lizard on the wall and our neighbour, Mani Aunty, would solicitously rush to enquire, “Soo thaiyyu?” (What happened?) We would point out the slimy creature…she would go to the passageway that divided our houses and call out, “Feeedossssss…” Firdaus, her son, would arrive half-asleep, and be handed a broom. He would wield it like a baton and with remarkable precision hit the lizard; it would fall to the floor struggling; someone would ask him to fling it outside the window from where it would find its way. But this was a manly challenge and until it had been decimated, there was no reprieve. I am amused now that while the whole contingent of ‘junooni’ Mussalmans would be cowering with their feeble “shoo-shoo”, the peaceful Parsi had blood on his hands.

My childhood was full of these little neighbourly observations – sutarpheni (a sweet that looks like dry white grass and sometimes even tastes like it, except for the sugar and pistachios) being sent to us on Parsi New Year; the daily chokh, a pattern made from rice powder, outside the door; Behram uncle, a soft-spoken man, standing in the balcony tying his Kusti (sacred thread) three times round his waist to signify good words, good thoughts, good deeds over his sudreh (a muslin vest) and muttering a prayer. This is his heritage from the moment he was initiated into the faith, not at birth but after his Navjote ceremony at the age of eight.

The family would always be dressed appropriately for the occasion. You wouldn’t find them shoddy. If they were going for a stroll on the Bandstand promenade, they’d tie scarves round their heads to protect their hair and ears.

This Irani household taught me about simple things and a language that was delectable. If Uncle as much as voiced his opinion about someone, then his wife would admonish him, “Marey-re, javaa de Bei-aam. Te taddan gadherro chhe.” (Damn it, let it be…that man is a complete donkey.) It took me a while to learn to pronounce Behram the Parsi way. I would mimic Aunty and after ‘Bei’ there would be a long inhalation before the soft whimper of an ‘aam’ was exhaled, almost like a meditative ‘Om’.

Of course, as one’s world expanded, I found it hard to believe that Parsis were an endangered species; they were everywhere. Haggling with hawkers, at the theatre to watch English plays (in which most of them were acting, anyway), when choir groups or Western orchestras performed in the city, in parks, at the David Sassoon library, usually snoozing on one of the wooden armchairs, in clubs eating ‘akuri’ (an eggy mish-mash) on toast, sitting in their now-dwindling eateries where they put up signs that read, “No smoking, no combing hair, no discussing politics”, driving at a snail’s pace, usually in the Fiat. A “Parsi-maintained car”, although used, is still considered as precious as a virgin in the automobile market.

And then you have the colonies. It is an entirely different world where you suddenly hear the same sounds, encounter people wearing similar clothes and even looking somewhat alike. But the status is not always the same. You may enter Cusrow Baug, but if one flat has the Grand Piano playing Schubert, and another has a famous ballerina or a film-maker, there are smaller houses with little furniture and a lonely man sitting and gazing vacantly at the wall clock that chimes every half hour. I know how hard it is because as a stranger when I had knocked on such a door for an assignment, I was welcomed in and offered porridge at 4 pm.

I hate porridge at any hour, but when you have it with pent-up tears the taste changes.

Highly recommend Pestonjee, a slightly dark film, quite unlike the standard jolly bunch of characters that are portrayed in films.
By Farzana Versey at 5:24:00 pm