As I've been repeating here, rape and molestation are being sexualised rather than criminalised.

This is what DNA had to offer: 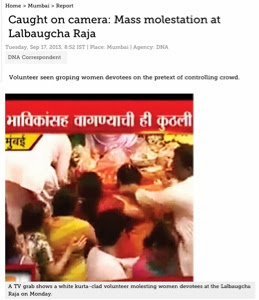 The latest in the Asaram Bapu case is that Ram Jethmalani, the defense lawyer, in his bail plea has presented a most curious argument to buffer the 'fabricated' theory:

Jethmalani mentioned that the girl was afflicted with a 'chronic disease' which draws a woman to a man and said this was subject to police investigation.

Asaram, like any accused, is entitled to legal recourse. However, is Mr. Jethmalani implying that the minor victim is a nymphomaniac? Although sex addiction is not a conventional malady, at 16 how can she suffer from such a 'chronic disease'? Are there other instances where she has been drawn to men in such a manner that it would result in her being abused? Let aside misogyny, this does not make technical sense.

Her parents have been devotees of the godman. Did she on any occasion express attraction, in word or deed? Why did Asaram Bapu not gauge all of this, if he is touted as an all-knowing guru?

I ask these questions not because I believe in this baloney — what works as legal charlatanism — but because it has been registered in the court files.

For a moment, let us go along with this fantasy. What happens to all the other arguments that were presented? Asaram Bapu is a canny man; there are cases against him. How far will his lawyers go to disprove them and put the reputation of others at stake?

What chronic disease does he suffer from?