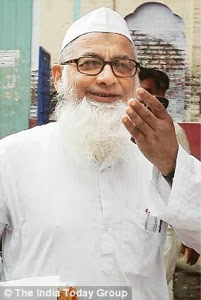 This is the man who has issued a fatwa against photography. You can see that he has no qualms about striking a pose.

I am really tired of saying that a fatwa means zilch. Yet, every other day — often in reply to a question — there is an edict. It is not binding on anyone.

Only the media seems to take the Darul Uloom Deoband seriously, and always refers to it as "India's leading Islamic seminary".

Quite naturally, a bizarre fatwa grabs attention. Some Muslims consult the seminary for general information. An engineer wanted to know if he could pursue his passion for photography. I am assuming he did so because of Islam's stand regarding iconography. He was told that photography is a sin.

This is ridiculous. How and why did it transform into a fatwa? The media tends to follow the Deoband's advise columns, and what it posts on the website. When push comes to shove, the organisation is more than ready to show muscle. A fatwa materialises as the last word. Newspapers and TV channels get excited.

The reporter is soon on the phone talking with the vice chancellor, Mufti Abdul Qasim Nomani, who says:

"Photography is un-Islamic. Muslims are not allowed to get their photos clicked unless it is for an identity card or for making a passport."

The reporter goes all Wahabi on him, mentioning how Saudi Arabia "that aspires to return to the earliest fundamental sources of Islam" (duh) permits it and even telecasts the Haj live. To which the Maulana replies:

"Let them do it. We do not allow it. Not everything they do is correct."

At any other time, the media would have used this to scream with joy about how Indian Muslims are under no threat of being Saudi-ised, and everybody can breathe free. But now is not the time. Now we have to prevent Indian Muslims from being denied their Nikons and Canons and dual camera phones. They need to be 'brought into the mainstream', and saved from such backward fatwas.

Really, take a chill pill. Most Muslims in India don't give a rat's ass about the Deoband and don't even know where it is, who runs the show, and what stuff they smoke.

Next on the reporter's itinerary is the All India Muslim Law Personal Board. One Mufti Abul Irfan Qadri Razzaqi agrees with the fatwa:

"Islam forbids photographing of humans and animals. Whoever does that will be answerable to God."

Reporter is on a mission. He "reminds" him about Saudi Arabia. To which the gentleman says:

"Just because they are richer than us doesn't mean they are also correct. If they are allowing photography they will be answerable on the Day of Judgement in the court of God."

See. You can do all you want, fatwas be damned, till you are alive. You may even perform the pilgrimage to Mecca in the horrid land that permits photography. You will finally be judged by a 'non-human' who, alas, cannot be photographed.

End note: I've used this picture before, but is it halal? 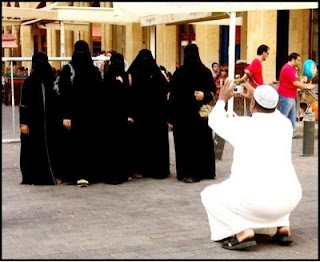