Dressing up for Modi? 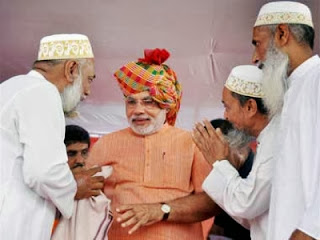 In what has been referred to as "Narendra Modi's rally" in Jaipur today, the “diktat" over the dress code is the major news. As happens often, the minutiae has taken over the discourse. According to a report:

Are the men attending a wedding or a special function that they'd dress up in sherwanis? Why is it assumed that all women would be amenable to wearing a burqa? How different is such a dress code from extremists issuing edicts? Will those who do not fall into the stereotype qualify as Muslim enough?

Some other reports have mentioned the presence of clerics from the Ajmer Dargah. They are residents, and would wear what they usually do. We get to see saffron kurtas and bandanas quite regularly. Are those people told what to wear? Does anybody object or applaud them for it? [In the picture that accompanies this post, Modi looks like he is dressed up for a purpose. Or is it the usual entertainment quotient he provides for all BJP functions as “showstopper"?]

One viewpoint is that this appeal was sent by the BJP's minority cell. It would be impossible for the cell to take such a decision on its own. Modi and party must have been kept in the loop.

Besides, how does this qualify as an attempt to reach out to Muslims? If they do indeed wear "Islamic clothes", what else is there to do? This is in no way about wooing the community. In fact, it would help in easily identifying the members and keeping a check on them to see how they react, and then 'profiling' them.

Vote-bank politics is less about appeasement and more about creating ghettos to use and abuse.