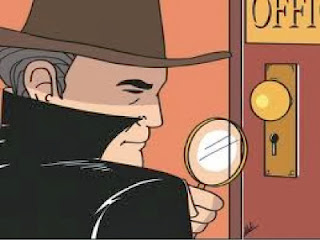 The anchor held up a piece of paper and shouted down a politician with the precious words: "I have this secret information." A rival channel did its own bit of smirking: "Our sting operation will give you the whole story."

It will not. This too is fed information. The reason there is a surfeit of 'stings' — how can a formal letter by a cop to his bosses be called a sting operation when he has written it and sent it? — is because newspapers and TV channels have saturated the regular routes and want to entertain. Many of the readers and viewers too wish to be entertained, and news stories, however controversial, become more interesting when they stink.

Sting operations get a whole lot of points by a gullible public that assumes those blurred video clips are done as an act of public good. No one bothers to check out the motives behind these moves. It is high time we made the mainstream media answerable, but the alternatives are not always as above-board as they appear simply because they too depend on the largesse of sponsors, advertising and benefactors.

A few noises are being made now about some of these exposés. I wish it had been done earlier, too. Then we would have been spared this rush and rash of scoops where dirt covers only more dirt.

I've said it in earlier pieces, and instead of repeating myself I shall reproduce two extracts, one from 2010, the other from 2007. [Unfortunately, opinions do not qualify as scoops and exposés!]:

Have sting operations changed anything? Have people stopped having their palms greased? Is there more awareness about wrongdoing? Are the culprits shunned by society?

You know the answers. They have, on the contrary, become even more important.

A reporter of a Delhi television channel tried to expose a teacher for forcing her students into prostitution. It turned out to be fake. It was done on the prodding of a businessman as a planned strategy to hit out at the teacher for owing him Rs 100,000. He called up a reporter who we are told harangued her to make a few quick bucks by getting into the flesh trade and supply women. It is said she fell for this bait. A colleague of the reporter was sent as a potential girl ready for the job.

The whole story sounds bizarre. Would a woman in a respectable profession be so gullible as to get into criminal activity? If there is any truth, then why has it been labelled fake? This is not a big channel. Had it been one of those fancy ones, do you imagine anyone would have made such a noise about its lack of authenticity? The reporter has been arrested. I would like to know what is being done to the channel owners. This isn’t just a sensational story. It is about an issue that concerns women and any sensible person. Sting operators cannot get away with it.

Is this about vigilantism at all? (In 2005), there was an exposé where 11 Members of Parliament were bribed to pose questions in the House. The website carried tape recorders and cameras to catch them red-handed and a TV channel aired what they thought was a complete travesty. These clippings were later shown in Parliament. Newspaper reports were dramatic: "Parliament was stunned into shamed silence."

Does Parliament feel no shame when elected members throw slippers and chairs at each other? Has no ministry ever been shamed for taking kickbacks by giving a contract to an undeserving company?

And who were the MPs who were paid Rs 15,000 to just over a lakh for asking questions? Were they important enough names? These nobodies suddenly got notorious fame as "the dirty eleven." I can lay a bet that even if they were not bribed and were told they would be given some media coverage, they would still have done what they did. The sting operation only helped make scapegoats of a few unknowns to let the real sharks march around like saints. A whitewash job has never been simpler.

The real scoop was this, and it had been reported in this newspaper: The television channel gave the sting operators about Rs 58 lakhs. Less than Rs 10 lakhs was spent on the entire operation. The bribe amount was less than Rs 3 lakhs. Other expenses were about Rs 5 lakhs. The equipment was available on loan. Was the balance money returned to the TV channel? Does anyone know?

There should be transparency regarding sting operations too. Jaya Jaitly, who ought to know, had made an interesting comment, that it would be honest if a person went to these sting operators and told them that someone was taking money for asking questions or getting things done; the snoops could then accompany the person and catch the culprit in the act.

Would they do a sting operation on cultural organisations or famous "respectable" artistes who get special privileges? What about nominated MPs from the "world of arts" who use their position to further their personal causes? What about NGOs that misuse foreign funds? What about media houses that take money from socialites to promote them?


The media as middleman, 2010, CounterPunch

Journalists have often got prime posts in social organisations or are sent on junkets; many of the hugely respected senior names conduct all their ‘investigations’ over the telephone, which means they are fed information by interested groups. What about owners of channels who get elected and become MPs?

Political stooges have always existed, only the level of subtlety has altered their persona. You just have to spend some time in any of the intellectual hubs in Delhi and you will see a journalist supping with a politician or a bureaucrat. There are TV channels that have given preference to young recruits merely due to their proximity to and sometimes family connections with such powerful people.

The (Radia tapes) revelations have become such a talking point, ironically, because they have been exposed with much flourish outside the mainstream media in India. Internationally, the Washington Post mentioned ‘paid news’ and reported that The Foundation for Media Professionals plans to host a conference on journalists as power brokers. The organisations’s spokesperson said, “We are actually happy that these practices have come out in the open. It forces us to address the problem. We as journalists sit in judgment of others all the time. We should hold ourselves to a higher standard.”

Journalists are fallible and their standards should be decreed by ethics and not morality and most certainly must not become a ruse for nobility. The self-examination should also raise questions about the media conducting kangaroo courts and making a spectacle of helpless common people.

"False history gets made all day, any day, the truth of the new is never on the news." (Adrienne Rich)