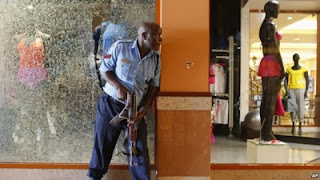 It takes extreme heartlessness to lob grenades, to shoot people in the head, and hold them hostage. People who have nothing to do with any cause, who are just going about their daily lives, enjoying an evening out with their families, or tourists taking a break from the sights.

What happened on Saturday in Nairobi is tragic and despicable. We have a tendency to compare, because we have become numb to killings largely because they appear on TV.

I would have liked to talk about my grandmother's early life in Kenya, the lullabies she sang to me in Swahili, the slaves her father released.

The crouched bodies and fear in the eyes of September 21 are a reminder of another kind of slavishness. We know who is behind the attacks. We even know why, to an extent. This does not mean anything. For, people are slaves to ideologies and politics, and nothing will stop them. The attempt to stop too is no free lunch.

Reports have mentioned the race of the victims, their nationalities, and it all becomes about who is mine, who is the other.

Al Shabaab, a terrorist organisation based in Somalia, has taken responsibility. The New York Times mentions that this attack was "one of the most chilling terrorist attacks in East Africa since Al Qaeda blew up two American embassies in 1998". Somalia and Kenya have been at war over three decades before that, and continue to be. It was territorial, to begin with.

Al-Shabaab’s spokesman, Ali Mohamoud Rage, said following the attack: “Kenya will not get peace unless they pull their military out of Somalia.”

Reports mention how the group was gloating in the social media. This trend has to stop. It is bad enough that we get sensational images on television. Such theatre of violence is close to the real thing, and glorifies the killers.

There is also a tendency to create more fissures:

• "The mall, called Westgate, is a symbol of Kenya’s rising prosperity, an impressive five-story building where Kenyans can buy expensive cups of frozen yogurt and plates of sushi. On Saturdays, it is especially crowded, and American officials have long warned that Nairobi’s malls were ripe targets for terrorists, especially Westgate, because a cafe on the ground floor, right off the street, is owned by Israelis."

Kenya is rich in natural resources, and it has seen levels of prosperity until, like many other nations, it was colonised. The expatriates continue to thrive.

However, is the Israeli establishment not there to do business? Don't they do business in the U.S. which feels under constant threat? Why is it always about 'us'? (Has the Israeli establishment expressed reservations?) The Somali group has been described as 'Islamist". Does that explain their earlier war with Kenya? Does that even explain the Arab entering Kenya in the 16 century to trade and staying on?

Eyewitnesses say the terrorists asked Muslims to leave. Unless they were recognisable by mode of dress, they would not know. And they don't really care, even if some reports suggest they asked people on the run to identify the Prophet's mother. One does not see terrorists do this in Afghanistan, Iraq, Pakistan where they target their co-religionists.

Rudy Atallah, the former director of African counterterrorism for the Pentagon, said: “I think this is just the beginning. An attack like this gives them the capability to recruit, it shows off their abilities, and it demonstrates to Al Qaeda central that they are not dead.”

Now imagine if the reports had not played into just this narrative. The Al Qaeda does not need the media to let it know what its members and allies are doing. The organisation is well-oiled and has its antenna up. What we are witnessing — the 39 dead people and 150 injured will be forgotten — is one more version of monopoly.

Dan Stackhouse, a commenter from New York City, sort of revealed the subtext:"Kenya is an old ally of America, not to mention Britain and other major powers. It would be hypocrisy if we did not aid them in their fight against the shabab in Somalia. For now we can do nothing about al-Assad's terrorism in Syria, but we can and should do something about this."

This is not a quid pro quo. Helplessness over inability to 'do' something in Syria should not seek replacement. The old idea of allies too does not work anymore. Besides, the power equations are different. (Not to forget that Britain ruled over Kenya.)

One has to only be exposed to lands where terrorists live to understand how desperate the ordinary people are, and how victimised they too can be... if not by bullets, then by branding.

All quotes from The New York Times

The issue of highlighting race is again evident in new findings. As reported:

The Foreign Office is investigating suggestions that a female British terror suspect nicknamed the "White Widow" could have been linked to the plot. Witness accounts have suggested a woman was among the attackers, fuelling speculation that Samantha Lewthwaite, who was married to 7/7 bomber Jermaine Lindsay, was involved.

She is wanted by Kenyan police over links to a suspected terrorist cell planning bomb attacks.In March 2012, it was reported that Lewthwaite, 29, originally from Aylesbury, Buckinghamshire, had fled across the border from Kenya to Somalia.