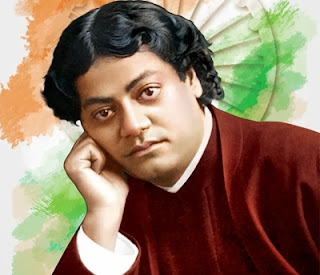 Would the young give up the occasional tipple and their cuisine choices only because of a leader? Does a leader who comes with a moral baggage — and selective at that — truly appeal to the youth? On the other hand, if the leader were given to some of these indulgences would the young be influenced by it, or is it something they are anyway attracted to?

Today, as one 'youth icon' Modi turns 64 (what happens when the youth grow older — do they discard these icons and refer to them as "senile" as some middle-aged folk have been doing about another leader?) — my thoughts turn to how self-righteousness plays itself out for political gain.

Last week, Shashi Tharoor was at the inauguration of a statue of Swami Vivekananda. BJP Kerala state president V Muraleedharan who was present stated:

“The union minister said that Vivekananda’s legacy cannot be appropriated by a particular section or group and went on to add that the monk used to eat meat and drink occasionally.”

Swami Vivekananda is now one of those sages that the rightwing is trying to claim as its own. He did have what may broadly be called a 'Hindu view of life', but it was certainly not a narrow divisive vision.

Tharoor often speaks before thinking, but this time, even if it is political expediency, he was merely trying to throw a spanner in the Hindutva works. In a fashion followed by the saffron parties, he was humanising Vivekananda, and there is much of that in his persona.

It was enough to create a controversy. BJP leader O. Rajagopal made what The Hindu refers to as "a frontal attack on Shashi Tharoor" (what could be the other option?) and demanded an unconditional apology. As the report mentions how this tale was spun:

Being a Bengali belonging to the Kayastha caste, Vivekananda may have had fish and even meat, but there was no reference of him ever having taken liquor.

His remarks hurt national sentiments and showed that Dr. Tharoor was still rooted in American culture and lifestyle. His remark that Vivekananda took to drinks was especially objectionable when campaigns are being launched to wean away the youth from liquor.

I should assume that these keepers of our palate culture will have no problem if Bengalis and other communities continue to eat what they want, and they do not have to follow state diktats on such habits.

Regarding drinks, it is not only the youth that needs to be weaned away. Kerala consumes a whole lot of alcohol; in many places elsewhere too the poor drink cheap country liquor that often results in death. This ought to be of concern and not whether it is a western lifestyle that some youth emulate. These young people are more likely to follow contemporary heroes than Swami Vivekananda, especially in their lifestyle choices. If the legacy of the Swami has any currency it will survive an occasional hic.

But that is not what certain parties want. They have no foot to stand on, so they recall saintly figures from the past and prop them up as engineers of some purification process. This only means that contemporary leaders are devoid of any good qualities that the youth can look up to. Swami Vivekananda is the new flag-bearer of this flushing.

The leader quoted in another report even said that "Tharoor has depicted him as an alcoholic". There is a difference between somebody having a few drinks and being an alcoholic.

It is clear that some of those who are sober can't hold their 'drinks' and in the stupor they find a little bit of trendy morality.

"Above all, beware of compromises. I do not mean that you are to get into antagonism with anybody, but you have to hold on to your own principles in weal or woe and never adjust them to others “fads” thought the greed of getting supporters." - Vivekananda

Image: A young Swami Vivekananda
By Farzana Versey at 8:32:00 pm