Mr. KPS Gill, did the police tutor Modi on the action-reaction theory? 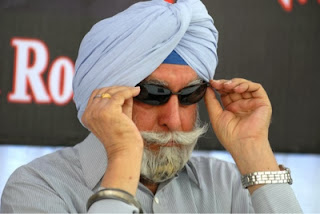 The fact that the Modi camp rejoices over a few statements by a tainted former deputy general of police reveals the desperation to get a "clean chit".

In May 2002, KPS Gill was called in as security advisor to Narendra Modi. On October 31, 2013, over eleven years later, he says the Gujarat Chief Minister cannot be held responsible for the post-Godhra riots.

"In law and order situations, it is the police leadership which has to respond and not the political leadership."

It happened to be the anniversary of the anti-Sikh riots when he said this, so it sounds particularly unfortunate. For, then, people like Sajjan Kumar and Jagdish Tytler, who have been tried for their role in the 1984 riots, would also be seen as blameless.

Why should Home Minister Sushil Kumar Shinde, or even Bihar CM Nitish Kumar, be made answerable for the recent Patna blasts, prior and during Modi's rally? After all, they constitute the political leadership.

Why question Akhilesh Yadav and Mulayam Singh for what happened in Muzaffarnagar?

When protestors are beaten with lathis and tear gas shells are used, why does the police force not take responsibility? Why does the matter reach the political leaders, including the President?

KPS Gill has got to have answers to these allied queries, for he cannot be selective.

He was appointed by Modi as security advisor, which is a political process and position, to an extent. It was three months after the riots. What did he do? Whose responsibility are compensations, rehabilitation? Who should visit the refugee camps?

"I realised that people of all political parties who were anti-Modi and anti-BJP were taking advantage of this mayhem and making all efforts to defame Modi one way or the other."

There is no denying that political parties always come in to take advantage, and the BJP is no exception. Could Mr. Gill explain how exactly does defamation of Modi take away his lack of intervention? The fact is that the matter did not end with the "mayhem" (interesting choice of word).

He charged the policemen and the administration had become communal after the incident in Godhra and Mr Modi, who had just become the chief Minister, did not have proper grip over the state machinery...he said that after taking charge as the security advisor of the state, he had visited all places where violence had taken place and policemen from top to bottom refuted having received any direction of the type being mentioned.

• The police deal with communal issues on a routine basis. They are not supposed to be communally prejudiced. The manner in which Gill is running down the Force is rather surprising.

• If Modi did not have a grip on the state, how does it matter? Why did he start using his remote powers? Don't they go against the former DGP's own thesis that it is not a political issue?

• There was much that happened soon after the riots, including the transfer of senior police officers. So, if the police leadership has to take responsibility, why were they shunted out? Would they not stand up for what they did? They did not transfer themselves, right?

Those cases are documented and the cops have served/are serving sentences.

• If they did not get any directions, why has no senior cop from Gujarat come out and said so in clear terms about the murders, the destruction of property, the encounter killings?

And why did Narendra Modi speak about action-reaction at the very beginning? Was he tutored by the cops?

There is a limit to the whitewash job.

Speaking of KPS Gill, even a whitewash job by him is not really capable of cleaning. He has, after all, served a sentence himself.

In 1989, he was charged for sexual harassment with 90 IAS officers signing the petition.

Rupan Deol Bajaj, an IAS officer herself, had persisted with the case and later said:

"Gill was convicted of sexual harassment charges by the Supreme Court and it's high time the government withdrew the Padma Shri award it gave him."

It is important to understand the mindset of such a man before taking his clean chit at face value.

"The rank and file of the Punjab police force feared him. I cannot say that they respected him. He was very supportive of his subordinates as long as they co-operated in achieving his goals. Even delinquents and evil-doers were tolerated if their actions fitted into his grand designs."

- Julio Ribeiro, who inducted Gill in the operations in Punjab