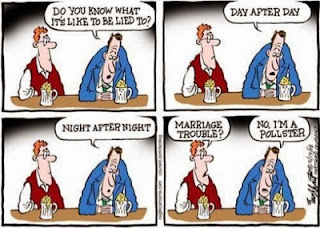 The word 'ban' is so potent that even those who do not know what is going on suddenly become agitated. Needless to say, these are what we charmingly refer to as the cream of society. This is not elite in the posh sense. You will find crumpled kurtas, jholawaalas, bidi-smokers, Old Monk drinkers in this crowd. Should you dare to even want a discussion, you will be deemed a conservative.

Now, here comes the rub. The rightwing political groups are part of the move against the ban on opinion polls.

Reportage and commentary have stuck to two neat divides of to ban and not to ban.

It is the AICC that has asked the Election Commission for "restriction on their [poll findings] publication and dissemination during elections". Congress party general secretary Digvijay Singh said:

“...These have become a farce. They should be banned altogether. The kind of complaints, information that I have got show that anybody can pay and get a survey as desired...In a country of 1.2 billion people, how can a few thousand people predict the trend. It has become a racket. So many groups have sprung up.”

One may have issues with the man, and also accept the possibility that the party is responding in such a manner because some trends are going against them. However, it is typically churlish to suggest that it is due to fear of Modi, especially as in the past the BJP too had problems with such polls.

Not so now. Narendra Modi is agitated by this undemocratic behaviour:

How much of freedom of speech and expression could he possibly believe in when his government has banned the screening of films and art galleries have been destroyed in his state? Perhaps he should have asked for opinion polls to find put the public reaction. He has issues with the occasion when there was a clampdown on the social media. It is only natural for him to have expressed "solidarity" because most of the accounts were part of the disruption process. These same accounts are out to discredit anyone who exposes their government and ministers.

It does not in any manner imply that other political parties are not prone to such muzzling, but do we really consider such chaos as democratic?

To digress: The Congress came up with the ridiculous suggestion that the marshes in Madhya Pradesh should be covered because the lotuses in them would be publicity for the BJP election symbol and against the campaign rules. This is asinine, and the party was called out on it.

"My concern is not limited to this proposal to ban opinion polls. Tomorrow, the Congress may seek a ban on articles, editorials and blogs during election time on the very same grounds. If they lose an election they may then seek a ban on the Election Commission and if the Courts do not support them then they may say why not ban the courts! After all this a Party that resorted to imposing the Emergency in response to an inconvenient Court Verdict."

A politician will target only his immediate opponents, notwithstanding the fact that he will camouflage it as a principled stand.

There is a rather misguided perception that this amounts to banning opinion. It does not. Polls are based only on random selection. Everybody knows that, like rigging at booths, these too can be manufactured, especially since today the process has gained a certain sex appeal where titillation works. So, you have trends that do not commit and talk about a wave and sway. This is really devious, for they are wiling to to play into selective hands until they can retain the primetime slot. There is nothing to lose for the sponsors, because the end result can be attributed to several aspects, including low voter turnout due to everything from climatic to anti-climactic factors.

If they are so useless, then why want to do away with them at all? My reasoning is that it once again props up a limited number of people as the constituency and the deciding factors. The impact works as auto-suggestion, and we have the great Indian middle-class with its online shopping and yuppie dreams believing in any spectacle.

It is particularly important this time — whether during the upcoming Assembly polls or the general elections next year — for it has become a circus where the competition is between acrobats and clowns. Arvind Kejriwal has used his now-patented idea of having transparency. How can there be transparency in opinion polls? They are safe, for they do not stick their necks out.

To the hyperventilating suggestion that this could be a prelude to banning of other forms of expression, it has been done before and not because of opinion polls. (Not too long ago, a spoof site on Modi was blocked.) The media is often restricted due to commercial considerations that want to cozy up to certain political groups. This is an ongoing bias. However, a reading of any analysis is most certainly less random and quite clearly an opinion. The right to reject that viewpoint is embedded in it.

One cannot say the same about opinion polls where amidst charts and chants you are being bulldozed into believing something that may not even be an outright lie, forget the truth. 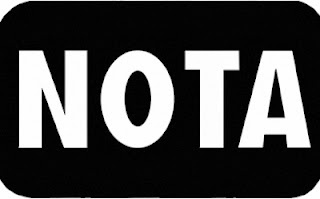 Rather interestingly, the Election Commission has confirmed the new symbol for the 'None of the Above' option, where voters reject all the candidates.

Is NOTA an opinion? It sounds good on paper. But it won't have an impact.

The EC has already clarified that the candidate securing the highest number of votes would be declared elected even if the number of electors going for the NOTA option surpassed the votes polled by the electoral contestants.

There goes the non vote. NOTA is a wasted opinion, and chances are that those who have made this choice would publicly claim otherwise, if the party that comes to power looks cosmetically good. Will those who opted for NOTA come out and claim to be votaries of it?

In some ways, the rejection of all candidates is a rejection of the electoral process. If no one is good enough, then just boycott. 'None of the above' reeks of self-righteousness, rather than an opinion.