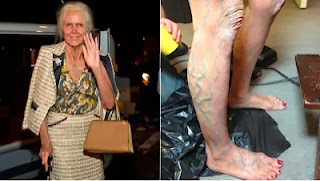 Why is old age fit enough to be a Halloween costume? Heidi Klum chose to dress up as one for the annual party. As Jezebel reported, "She's honestly unrecognizable — look at the fake veins on her legs and hands. She must be wearing fake skin over her skin, like a festive version of Necromancer pants."

These pants are made of human skin. We won't go there now, but Halloween is supposed to commemorate the dead, martyrs and loved ones who have left. What message does this 'costume' convey? To begin with, it does not look like a costume. It is realistic. It makes it appear that the end is near for old age, and the body must be ravaged and sag and wrinkle.

As an international supermodel who has seen a lot of cosmetic intervention around her, Heidi ought to know that this is not how old age always looks. I am not against the fact that this could be the natural consequence, and there is nothing to be squeamish about it. But for Halloween — when everybody wants to do a make-believe? Had she chosen a gothic version, it would have been more than fine. This, however, is eerily reminiscent of the real, and it does not appear to be granted the respect it deserves.

There seems to be a whole attitude towards ageism that props up not just the Botox industry, but more damagingly the thought process. Youth, irrespective of maturity, is seen as the final authority, the mantle-wearers, the shining knights and primped up goddesses.

Had these fake veins been real they'd hurt like hell. Fantasy reduces them to a caricature.

I had written about how Halloween made me Somebody Else
By Farzana Versey at 10:50:00 pm