Will Tarun Tejpal open a can of worms? 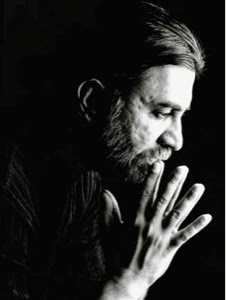 The manner in which the case of the editor who sexually exploited an intern is being played out one would imagine that people never had a low opinion of the media. From the looks of it, they expect the highest standards of propriety, chastity and morals from the news purveyors.

Tarun Tejpal, founder and editor of Tehelka, the investigative and sometimes controversial magazine, forced himself upon a young reporter from his office during the recent ThinkFest organised by the magazine. He wrote a letter to the managing editor; she, in turn, forwarded it to the rest of the staff with a short note.

The letter has been taken to the cleaners, and rightly so. But, let us pause and think. What could he have said? I am surprised he put anything on record at all. Why is nobody suggesting that perhaps he has been forced to by one or two of the many who are supposed to be sponsors or 'well-wishers' of Tehelka? 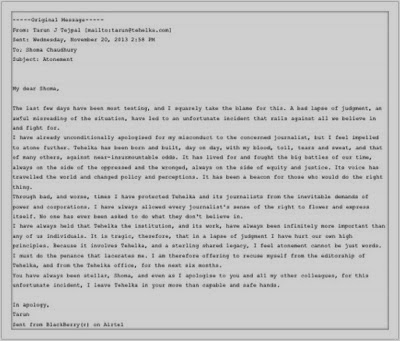 In the note, he does a promo for his mag. Let us look at it from the long-term perspective. He has to keep his best people around, and ensure that they are not affected by the scandal. It is part patriarch and mostly self-interest. The financial stakes are not to be sniffed at. His mention of a six-month leave is probably a face-saver. Or, perhaps, someone up there has provided some sort of guarantee?

Tejpal, of course, attempts to cover his tracks:

"It is tragic, therefore, that in a lapse of judgment I have hurt our own high principles. Because it involves Tehelka, and a sterling shared legacy, I feel atonement cannot be just words. I must do the penance that lacerates me."

This is all about him, and not a thought for the young woman, the daughter of his old colleague, his daughter's friend. However, the quibble over his use of terminology has revealed something: most have played right into it by getting moralistic themselves rather than treating his behaviour as a crime that needs to be tried legally.

Shoma Chaudhary in her letter to the Tehelka team has called it an "untoward incident". Again, much as this term is reductionist, did she have a choice if she had to forward a note? Could she go beyond the mandate, that too when she was to be in charge of the team?

On NDTV last night, she came across more strongly, and spoke about treating this case as sexual harassment at the workplace.

One needs to broadbase this, to include SH in other work-related environment too. Women journalists have to conduct interviews that are often not without the uncalled-for attention they receive. I am deliberately being euphemistic here, because adding to the sexual connotations just gives those looking for a high a talking point and little else.

This incident, like many others, has become about scoring over an opponent. Tehelka was supposedly a magazine with Congress leanings, so the opposition is quick to bring in references to Asaram Bapu and even the stalking by 'Sahib' in Gujarat, as though one evil cancels the other. Then there are competitors in the media, who have found a wonderful opportunity to pick holes at everything Tehelka has done, as though their own house is clean.

Should this incident be an example for exposing the media? Yes. But, if anybody thinks it is an isolated incident, then they are wrong. The assumption behind wanting such an exposé is that the public really did not believe such a thing was possible and the media was above-board. I doubt if it is naïveté. It seems more like the feigning of innocence so that they can now concentrate, rather lasciviously, on a case study.

However, can one entirely wipe out the work of many of its reporters only because of what their boss did, unknown to them? Now that they know, should they be punished for being part of the organisation?

The problem here has ceased to be about sexually abusive behaviour. Tejpal is the right candidate for pillorying. Brash, flashy, and sanctimonious. Even a letter written by an environmentalist made a mention of him and his red Pajero.

To be noted therefore: If a person in a position of power is not brash, flashy and does not have a red Pajero there is a better chance of his crime being less eyeball-grabbing. Tejpal had plans to start Prufrock, some sort of elite club. Where did he get the money, how can he do such elite things after claiming to stand up for investigative journalism...such questions are posed by those who seem clueless about the media, or think it better to go along with the flow.

The whole corporate structure works on barter, and as has happened often power is abused. It would not help to indulge in innuendo or even give random examples.

In some cases such abuse is passed off as consensual. This sort of consent is as forced as molestation. Besides media heads, there are the sponsors, the businessmen, traders, film stars, PR agents, and even colleagues that follow a pecking order. Women are used as bait, if not a straight honey trap. Go fly a kite if you did not know about this.

The Tehelka ThinkFest has been in the news regarding some of its sponsors. Again, I have an issue with all such fests because they only dumb down intellectual/literary exchange and compromise them at the altar of the highest bidder. For the critics to now use unconnected material from the past is sheer opportunism and will do nothing for the crime for which Tejpal must be tried.

Is anybody really interested in the victim or justice for her? Does it matter whether or not she covered cases of exploitation for the magazine? What if she wrote a gossip column or about fashion or sexy things — should we then judge her differently?

If anything, Tehelka was given a halo by the readers, mainly for its over-emphasis on sting operations that became trendy. Now, they are treating this as the story of the fallen hero.

Justice is not about self-righteous indignation.

Also read my 2003 essay (from an anthology on the media): When puppets hide behind pomposity

Although most people are in the loop of who said what, just to put on record what the girl said:

In her complaint to Tehelka Managing Editor Shoma Choudhary, the victim says, "It is extremely painful for me to write this email to you – I have struggled with finding an easier way to say it, but there isn’t one. The editor in chief of Tehelka, Tarun Tejpal, sexually assaulted me at Think on two occasions last week. From the very first moment, I wanted to call you, or find you and tell you what he had done to me – but given how absorbed you were at Think; preparing for and conducting sessions, and the fact that it was impossible for the two of us to get even a minute alone together, I could not. To add to this, I had to process the fact that it was Tarun who molested me — my father’s ex colleague and my best friend’s dad, and someone I had so deeply respected and admired for so many years."


“I hope you will also understand how traumatic and terrifying it has been for me to report this to you — and yet how critical it is that Tehelka constitute an anti sexual harassment cell as per the Vishakha guidelines immediately, to investigate this matter. At the very least, I will need a written apology from Mr Tejpal and an acknowledgement of the same to be circulated through the organization. It cannot be considered acceptable for him to treat a female employee in this way.”

And here is Shoma Chaudhary's statement
By Farzana Versey at 10:08:00 am