It is not about Sachin Tendulkar being honoured with the Bharat Ratna that is the issue. It is the timing, the manner in which the highest civilian award is handed out for a personal milestone. Sachin has played well for India, no doubt. But, why did the government not wait to confer this award? It seems now that it is a populist choice, almost as though bowing to public pressure and thereby scoring political points.

It is no secret that the Padma awards and Bharat Ratna too are driven by political considerations. At the run-up to the former, there is heavy lobbying. The lobbying for Sachin to get the Bharat Ratna has been in the public domain for a while now. I watched Lata Mangeshkat, who has taken on the role of advising on awards and political positions these days, root for Sachin on a TV show, as he played his last test match.

What exactly does such retirement mean, in days when the game offers so many options? Sachin, like many other cricketers, has used his position for commercial advantage. It is fair enough to say that he will continue to endorse products. Today's paper had this ad: 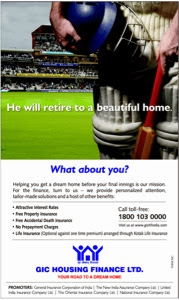 In wanting to pay tribute, it has inadvertently sent a message that here is the hero who has everything that you may not be able to aspire for, but at the very least you should have something to return to. There is something a little sad here.

On November 16, Sachin played his last match as people before him have done. His statistics are better, way better. His record as a 'clean cricketer' made him a middle-class icon. Here is the dichotomy, and to an extent it is a bit disturbing. Indian streets are full of gully cricket. There were people from humble origins who played successful innings.

Sachin came from a decent, educated background. Let us not for a moment forget that this would have had an impact on perception of him. He moved out of the literary enclave where he spent his childhood, he drove swishy cars, wore designer clothes, opened restaurants, was seen in the best company. Anybody else would have been seen in a different light. His persona did have something to do with it, but one cannot entirely ignore the middle-class propensity for accepting upward mobility and business acumen that does not come with any obvious taint.

This squishy image, bundled with achievement, has kept him safe from any slurs. Indians are cricket crazy. They think of Sachin as god. These are not streetside boys, but the educated. Those who can rub shoulders with the big people because now there is that little hope where smarts have replaced knowledge. The behaviour of his fans is no different from that of the bhakts of some politicians being built up as cult figures. 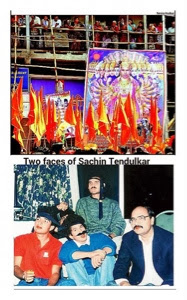 The cult of Sachin is in a different league with celebrities endorsing him. Should one have a quarrel with the honour for Tendulkar only because of this?

No. But, why does public sentiment not matter where it counts? The government comes out looking like it wanted the popular vote and decided to ride the crest.

There in the audience was Rahul Gandhi, sitting not in the VIP box, but with the spectators. There was Krishh Hritik Roshan, our version of Superman. There was Aamir Khan who has made his activist career with selective televised truth through 'Satyameva Jayate'. There was Nita Ambani, the owner of IPL team 'Mumbai Indians', who has already announced that Sachin will continue to play an important role. Another party at Antilla will soon be announced.

Tendulkar is the first sportsperson to be awarded the Bharat Ratna. This should make us feel ashamed over how the Indian government treats sports, and ought to make it obvious that this has nothing to do with love for sports. Yes, Sachin will get the facilities to run academies. Therefore, the highest civilian honour is like any popular award.

However, one must grant it to the authorities who made the final decision. They knew there would be suspicious minds, so they announced two recipients. The other one is Professor CNR Rao, the man behind India's maiden Mars mission. The papers have given him a footnote paragraph:

Prof CNR Rao is an eminent scientist and a well recognized international authority on solid state and materials chemistry. He has published over 1,400 research papers and 45 books.

Good move. Sachin fans can continue to hog the limelight because no one will be unduly bothered about Prof. Rao and the government can breathe easy it can fool most of the public that it has not been biased or opportunistic.

Yet, a maiden Mars mission? I suppose it is all about the confluence of planets and stars.

For those who came in late, Justice Markandeya Katju had been lobbying for Mirza Ghalib to be honoured with the Bharat Ratna. Read my take on that: Writers, Patrons and Politics

Second image in collage is Sachin with Manjrekar, Vivek Razdan and journalist Shekhar Gupta in 1989 tour of Pakistan. I've used it before here...the lipstick boys.
By Farzana Versey at 6:57:00 pm