The Last Supper is not just Resurrection. It seems a challenge to authority, to the haters, to those who kill, and who cannot stand dissent. It is rebirth, not of oneself but of those who stand by you. It is a lesson to face the traitor head-on, but also to keep people guessing about the identity of the one who betrays — in that way, everyone is on their toes.

Jesus was a sharp man. He went through tribulations, yet he also knew he was destined to be much more than one nailed to the Cross. There has been much analysis of the famous eponymous painting of the event by Leonardo da Vinci, including the sort of food displayed. The salt-shaker in repose as bad omen; the plate before Judas being empty; the choice of fish - did Christ get his apostles from among the fishermen?

Bread and wine, of course, mean what has been said:

"For I received from the Lord what I also delivered to you, that the Lord Jesus on the night when he was betrayed took bread, and when he had given thanks, he broke it, and said, “This is my body which is for you. Do this in remembrance of me.” In the same way also he took the cup, after supper, saying, “This cup is the new covenant in my blood. Do this, as often as you drink it, in remembrance of me.” (1 Corinthians 11:23-25)

Would remembrance imply rejuvenation of those who remember? Are they the only chosen ones?

I am not qualified enough to discuss the symbolism in religious terms, or even in detail. Also, I was quite intrigued by this other painting by Jacopo Tintoretto: 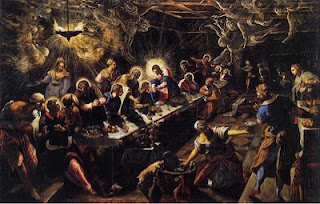 It is darker, has more happening, and except for the light near Jesus, the rest is almost mundane. Does it need the routine to show up brilliance or does brilliance put everything and everybody else in the shade?

Was this spiritual barter? Or, is it the submergence of flesh to live in another (off another?)? If the eternal is based on the temporal, then is it really eternal? 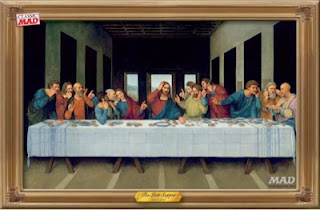 PS: It took a Mad takeoff, with cellphones playing an important role, to suggest that, indeed, the temporal is eternal, connecting, staying in 'touch' with others and, therefore oneself.