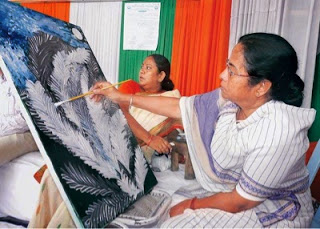 If a celebrity sells a refrigerator to an Eskimo, it will be sold. We see this often in our society pages. So, why is it surprising if a painting by West Bengal Chief Minister Mamata Banerjee goes for Rs. 1.8 crore?

Narendra Modi landed up in Kolkata for the BJP campaign and alleged:


The reason for his interest in art is, of course, to score political points. In this case, "the multi-crore Saradha ponzi scam". Sudipta Sen, the key accused, said, "I didn't buy the Chief Minister's painting."

A couple of points:

The entire amount which will be raised from this exhibition will be used to run campaign of the Trinamool Congress for the ensuing panchayat elections.


The Election Commission is being called upon to intervene in such cases now and is wasting its time. If there was indeed such a transaction, it is not possible to keep tabs if some of the money was paid in cash. And certainly no party can take a moral position on this.

The TMC's Derek O'Brien repeated his bluster, seeing how his 'bravery' is appreciated by social media activists:

"Blood is still fresh in the hands of the butcher of Gujarat. If he makes personal attacks against (TMC chief) Mamata Banerjee, we can also ask tough questions."


Why is it a quid pro quo? Why hasn't the party asked those questions before their leader was the target of personal attacks? This personality cult stinks. The riots and killings are well-documented. A bunch of people capitalise on them only when it suits their politics.

Memories are evanescent. Or, perhaps, agenda-driven. If you hate Modi, forget Mamata Banerjee's track record in Singur, in rape cases, in dislocating villagers, in censoring, in not permitting any criticism of her?

This is what passes for liberal analysis.