It’s a good thing that in a wired world we connect with information we might not have had access to so easily. But, together with that, there is also an excess of ‘uber facts’ that pass for knowledge. And then there is the surfeit of tributes – to coupling, to uncoupling, to botched-up cosmetic surgeries, to products, to people as brands, to débutantes, to the retired, to the living, to the rumoured dead. To the dead.

It does not matter whether you know anything about the deceased, or of the others, but it has become mandatory to add to the info pool.

Today as I signed in to access my mail, I saw a caricature of a man playing the table. But my eyes were riveted by the second ‘g’ and ‘l’ of google. They reminded me of Mahatma Gandhi’s glasses and walking stick. The link, of course, takes you to Ustad Alla Rakha. It is to celebrate his 95th birth anniversary. Who decides which year is worth commemorating? How many people who do not know him or about him would be enthused enough to read up or listen to his music?


Here is a short documentary on him:

What we end up with is over-the-top ‘connoisseurs’ who seem to know all, or the jejune attempts at keeping up with the Joneses that sometimes takes the form of distasteful parody.

On Monday, Zohra Sehgal turned 102. It is a remarkable moment for a remarkable lady. But the photograph that made it to most newspapers and websites was of her holding the knife high and, as one media outlet said, “attacking the cake”. She is an effervescent woman, but somehow her stance and the onlookers seemed to be at odds. Who were they? Family? Neighbours? Close friends? Where were the celebrities who keep throwing sound bytes about her achievements, about how lovable she is? I found the cake-cutting and the observers incongruous. 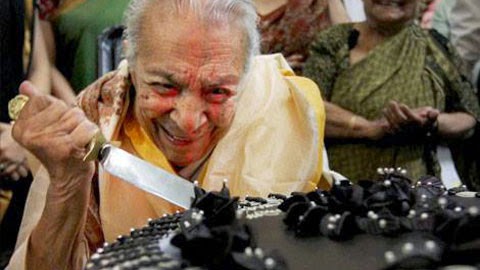 The picture I have chosen is gentler. There are personal moments when people end up as performers for an audience that only seeks certain characteristics, and thereby reduces them.

On her hundredth birthday, I had written:

There are times she acts as a link between generations, between spaces, between ideas, like a sutradhar, the perennial story-teller who weaves the chains together.


We don’t seem to care for stories anymore. The whispering gallery is where we stand and assume to understand life.

Here is the piece on her 100th: A hundred seas: Zohra Sehgal