There is much, much more to call out Shazia Ilmi on. Not this:

“Don't be much secular. Muslims are too secular and they should become communal. They are not communal and do not vote for themselves. Arvind Kejriwal is ours. Muslims have remained secular for long...have voted for the Congress and helped them win. Don't be so secular and look at your house (community) this time. Other parties have their votebank intact and Muslim votes split. This is a controversial statement, but we should look at our own interest.”


Ilmi, the Aam Aadmi Party candidate from Ghaziabad was talking to some members of the community, including clerics. As is expected, there has been a reaction. Her own party members believe she should not have said it. She herself has clarified:

"I said it half sarcastically. Somebody was saying Muslims are very communal. I am saying Muslims are not communal, infact they are very secular. They need to be communal. This does not mean to incite hatred. They must think of themselves and must not be political slaves. What have the political parties done for Muslims in terms of political empowerment and representation in either government or private jobs, education... in terms of economic and political opportunities."


I figured the sarcasm bit out immediately and I am sure her audience did too. The only ones who did not are her party cadres, the opposition, and the media.

Their reason is obvious – to extend the show. For long the BJP has accused AAP of covertly working to benefit the Congress. But, then, why would they want the votes that would probably go to the party? Will AAP divide the votes against the BJP, and then see how it goes?

Besides that, there is Ilmi’s ‘be communal’ suggestion. Everybody is using the communal card or offering sops based on it, every group wants to protect its own. Why is this so surprising? I suppose wanting to build a Ram Mandir in the BJP manifesto is about the development module the party talks about.

If you look at Ilmi in this picture, she was not even trying to be non-communal. She was reaching out to a group of Muslims, and with her head covered was trying not to disrespect sentiments, although it is unlikely a non-Muslim would have tried to do so, and whether the people there might have been offended at all.

From some responses, it is rather amusing that those who have often been abusive towards the community and slandered its members for divisiveness now believe one newbie politician is spreading the message of communalism. Will they take back their insults, then, considering that Muslims are not communal? Interesting to see how they get trapped in their own arguments. 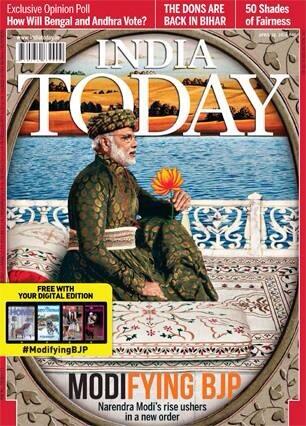 PS: Narendra Modi is trying hard to drop his communal stance. This magazine cover takes him right back to the days that his party wants erased. How will he build a temple with this image?!