Modi: The Jungle King and the Rhino 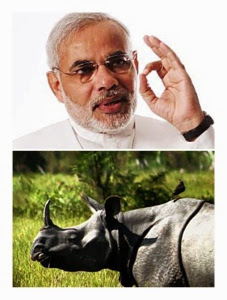 I have woken up before the sun peeped out, and struggled with hot plastic cups of coffee, climbed on an elephant's back with people I did not know, to be able to spot you in the thick of the forest at the Kaziranga Wildlife Sanctuary.

I knew you were precious as you smirked and gave us a glance and we went berserk capturing your one horn for a smudgy posterity. You, dear Rhino, knew you were different.

But did you imagine that you would be right in the thick of the Indian election fever, that too when the place you are native of — Assam — has never been given the respect of a mainstream state?

I have imagined your tears as poachers killed your parents, children, friends. Never a handsome creature, your USP was the hauteur you exuded, and that curving weapon-like horn that nature had bestowed upon you. I knew I scalded my tongue with milky coffee too hot to handle as I watched your droll manner. Even from the elephant-back height, we felt small and insignificant.

There have been attempts to save you before, but nothing quite compares with what the BJP's prime ministerial candidate has done. Like all politicians, Narendra Modi chose a tourist attraction to make a point. In this way he can internationalise an issue, get foreign investment, and also sound sympathetic.

Are you in tears now, tears of feeling wanted, tears of joy? This is what he said:

Please tell us, can you recognise Bangladeshis? Did you know where I was from, or that man from Amritsar or the lady from Spain? You share the jungle with other animals, some you get along with, some you don't. But you guys know how to survive. There is no acrimony. You do it because it is instinctual.

Are you shaking your head and wondering how you have been dragged into this political controversy. It happens all the time. It is called appeasement. Any small group is targeted (yes, just like what poachers do) and given the impression that it will be looked after. Naturally, gratitude is also an instinctual emotion. You want to return the gesture and promise fealty. However, unlike humans or domestic pets, you cannot express it well. So, the well-wisher uses another group as your enemy. You know what? That group has been the real concern, not you. Sorry to break it, but it is Bangladeshis who are being 'poached' here.

Ask yourself: Even if all other animals leave, how can they take up your space and live in the wild? You are being used. By putting you on a pedestal as "Assam's pride", your space on the ground is already taken away. Like this:

I know what you are thinking. That we humans will descend to any depths to score points. As George Orwell wrote in a work that can be read as a tribute to you and your jungle mates: