The price of a home 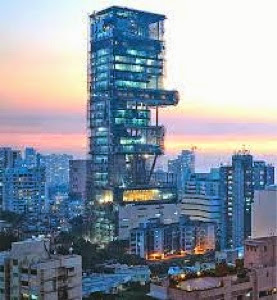 Mukesh Ambani's home at Mumbai's Altamount Road still appears to me to be under-construction. There is something incomplete about it. Or, like a wedding cake that's been haphazardly sliced through. At night, it transforms into a lit-up bauble for Brobdingnagians.

It comes at a price and now it has topped the list, according to Forbes:

The title of the most outrageously expensive property in the world still belongs to Mukesh Ambani’s Antilia in Mumbai, India. The 27-story, 400,000-square-foot skyscraper home–which is named after a mythical island in the Atlantic–includes six stories of underground parking, three helicopter pads, and reportedly requires a staff of 600 to keep it running. Construction costs for Antilia have been reported at a range of $1 billion to $2 billion. To put that into perspective, 7 World Trade Center, the 52-story tower that stands just north of Ground Zero in Manhattan with 1.7 million square feet of office space, cost a reported $2 billion to build.

A rich person is most certainly entitled to spend wealth as s/he desires. There are wannabes who aspire to things the rich want. However, when it is a home in a city with a huge disparity in wealth among its citizens, then it ceases to be a question merely of personal riches.

Reminds me of wellknown architect Charles Correa, who and said:

“When I visited Australia I realised that save for a few homes most of the people in the cities live on similar-sized plots. Australia, I thought is locked into equality while in India we are locked into inequality. Mukesh Ambani has proved it. ‘This is the amount of urban space I control,’ he is telling us by building that home. At the same time you have to be impressed. What a huge ivory tower!”

Poverty bothers us, whether it is due to sympathy or because its presence is considered a nuisance, an intrusion into our space. We drive past, eyes averted. We walk past, waiting to get out and inhale. We are uncomfortable; this is not about us.

Why don't we feel the same way about the ostentatious although that too is not about us? We drive past and look with awe. We walk past, slow our steps until a guard looks with suspicion. This makes us uncomfortable because poor guy has access to super rich.

In that, we too live in ivory towers sponging on other people's make-believe.