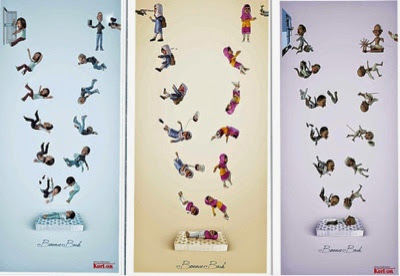 I do not know who would buy a mattress after seeing such images. Kurl-On is a well known brand. It has run a series using three public figures from different generations and for different reasons — Mahatma Gandhi, Steve Jobs, Malala Yousafzai.

The last one has been pulled up for bad taste.

The ad shows the young girl holding up her hands while facing down a gun, and then being shot in the head. She tumbles through the air before coming to rest on a Kurl-on spring mattress. Rejuvenated, sthen "bounces back" -- that's the campaign slogan -- to receive Pakistan's National Youth Peace Prize.

The ad agency is the local branch of Ogilvy & Mather.

The head of the Chilean studio that did the sketch admitted the gunshot stood out in the drawing.

"The Kurl-on ad tries to do the complete opposite, it's about triumphing over violence. The scene portrays a real event, an example of heroism that is very powerful, especially in Eastern countries, which is what they told us they wanted when we started the graphic."

If 'bounce back' is the tagline, I still don't get it. Do people want mattresses that bounce? Do they bounce on them? Being springy is a different thing altogether.

Ogilvy has apologised for the Malala segment. I can well imagine they would be concerned as she is an internationaly-accepted figure now and they cannot afford to antagonise the political brains behind her. There is silence about the other two though, and not only because they are dead. I find those images equally offensive.

• a young Steve Jobs being booted out the door, only to bounce back in his signature black turtleneck, showing off a Macbook in front of a camera.

• a young lawyer version of Mahatma Gandhi thrown out of a moving train and rallying back as the robe-clad Indian independence leader.

Bouncing back in a situation does not always mean being shot at, booted out, thrown out. In a subtle way, this is empowering those who do it — the corporates and the racists, who are everywhere. Normal people too bounce back from setbacks, personal and professional.