When will we kill patriarchy for our honour? 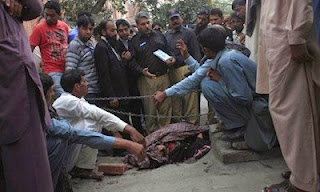 I detest the term 'honour killing'. It assumes that somebody's honour is at stake and therefore the murder has social sanctity.

Farzana Parveen was attacked by her family for "marrying the man she loved". She was pregnant. This happened in a big city, Lahore, Pakistan. It was in the day, at a place where there is always a crowd — right outside the high court. People stood and watched as her family members, including father and brothers, hit her with bricks and batons.

She was appearing in a case filed against her husband Mohammad Iqbal for kidnapping her. Her family had come prepared with guns and first fired shots in the air. It would seem the intent was to take her away. When this did not work, they picked up bricks and started pelting her. Her husband managed to escape. I find this disturbing. While it would be impossible to shield her against 20 people, he could have stayed there.

What was the crowd doing? Even if they did not want to get involved, they could have called for help. This is sickening. A report says:

The Human Rights Commission of Pakistan, a private group, said in a report last month that some 869 women were murdered in 'honour killings' in 2013.

These are cases that get reported. Most are not. According to Pakistani law, if the victim's family pardons the criminal, it is acceptable with a few conditions. Many of such families are poor and settle for monetary compensation. In this case, the family is also the criminal. Although technically her husband will have to take a call, her parents would be permitted to do so. With the lackadaisical attitude of the cops, it is likely that nothing will happen. They all escaped. The father who did not handed himself to the police. He is not one bit repentant:

"I killed my daughter as she had insulted all of our family by marrying a man without our consent, and I have no regret over it."

This qualifies as 'honour'? It is true that in many societies such relationship decisions are still taken by the family. It is often explained as the need to protect the woman (and men too). However, the scales are clearly tipped against the woman, as in this case. How did she bring disrepute to the family, and how does their blatant act of bludgeoning her not do so?

Some people have taken to replacing the word 'honour' with 'dishonour', which is much the same. The onus continues to be on the victim. She is supposed to bring dishonour. Terminology reveals a lot about how cultures evolve, or rather regress. There is a tacit acceptance that a reputation has been compromised, which is why it is so wrong.

Did those onlookers know what honour was involved here? Yet, they kept quiet. Partly because it is understood that something must be wrong about the woman's character or behaviour that prompted such rage. It looked as though they were participating in some ritual where they did not need to comprehend the language, yet believe in its significance. This is not about an unacceptable love story, for folklore has plenty of them. It is about how patriarchy sustains itself.

We hear about gang-rapes "to teach women a lesson". The message being that if a woman chooses to be with someone other than what is deemed right for her she has become the property of a 'rival' and is therefore territory to be reclaimed, or just claimed if the criminals are not known.

Added to cultural conditioning is the class structure. It is often the ones higher in the hierarchy who commit such acts against the poor or those belonging to a 'backward caste'. In india, the latter is common, and almost every other day we hear about women sexually abused or killed because they went against the norms. Their partners are not spared if they belong to a lower caste.

It means that patriarchy itself has its own hierarchy. A bit like racism.

In Houston, Aaron Aranza beat up his 15-year-old daughter with a belt for choosing a Black man as her dance partner. It was for a traditional 15th birthday celebration, and he discovered her choice during the rehearsals.

Here too, he might explain it as 'honour'. A young woman in a supposedly progressive western environment cannot make a choice that goes against stratified ideas of what is acceptable. She was quite obviously unencumbered by divisive colour palettes in her personal interactions. That is the reason she probably did not think of her partner in black or white terms.

Some reports have specifically highlighted that her father is Hispanic, which says a great deal about how the media adds to the pecking order, that is no order at all.

The father's rage is about assertion of not just the superiority of colour, but of himself as owner of his daughter.

The centuries' old attitude has never gone away. There can be no freedom if women are treated as property and crimes against them are deemed to be about protection of resources, and these resources are women themselves. They aren't allowed to own their minds or their bodies.

Those who do so are seen as a blot. Isn't it time for such 'blots' to expose the stains on the male mindset? When will we kill patriarchy for our honour?

What do the new angles mean?

Farzana Parveen's husband admitted that he killed his first wife to marry her.

There was no honour involved in that.

The latest news is her sister insisting that when they came out of the court, she wanted to go to her waiting family but Iqbal and Iqbal's accomplices beat her up with bricks.

Whatever be the truth, a few points:

Irrespective of who did what, she was brutally killed. We should stop pigeonholing such murders as 'honour killings' because, besides the points mentioned earlier, they impede justice.

Also: Is this honour rape?