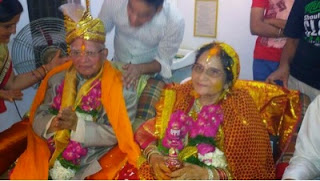 The N.D.Tiwari saga has now resulted in retribution. Whatever people might like to call it, the 88-year-old legalising his relationship with Ujjwala Sharma that was not anymore a relationship is the offshoot of years of guilt.

There are reports referring to his glad eye and other such stuff that is not germane to what he shared with the woman he has married. She says:

“He wanted to give social sanctity to our relationship, which was very old and we have a 35-year-old son. We will complete legal formalities after which we will invite all."

Social sanctity often means social security. Tiwari did not really care about public opinion. It is quite likely he is doing this because there is nothing left to lose anymore. He will be absolved of the feeling of having wronged; their son Rohit Shekhar who had dragged him to court in the paternity case will think he has scored some success in legtimising himself and his mother; and Ms. Sharma will be effectively 'saved'.

In all this, we forget a few things, including the fact that he was not quite the only bad guy here. (I shall reproduce some bits from an earlier post)

He snapped ties with her and the son in 1995. His wife had died two years ago. He was not interested in the relationship. She moved on and got married to Bipin Sharma; they have a son. Tiwari resurfaced in her life. Amazingly, she admitted: “Between 2002 and 2005 there was a semblance of a relationship between us.”

She had a husband, and went ahead to be with a man who was now quite a prominent politician, who had deserted her and the son, and shown no remorse.

In 2006, she and her husband parted ways. It was also the year Rohit started a campaign against Tiwari.

“In 2006, I started a campaign against him and sent out letters to everyone in Uttarakhand about our relationship. He kept telling people I was not his son but just a blackmailer. That’s when I started looking for legal options. This is not a battle for his property or money. I just want to make peace with myself. He had told me a 1,000 times in private that I looked like him. How I had inherited his nose. But if I met him in public, he would simply look through me. That hurt.”

I hope this puts an end to the hurt. It makes me wonder, though, about what really gives relationships sanctity. Is it merely the presence of people in our lives — their acceptance of us? Are they accepting themselves in that relationship with as much emotion?

There are other aspects, should you be interested, here
By Farzana Versey at 7:02:00 pm