Smriti Irani, Sycophancy and the Politics of Vengeance 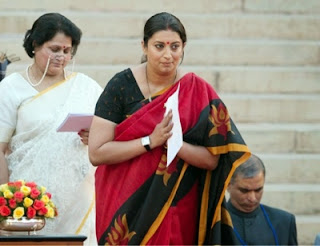 Twenty five percent of women make up the Modi cabinet.

Are we sexist if we question the credentials of some of these women, as much as we do so for men? If we can ask why Arun Jaitley has become the second most important man in the cabinet despite losing the elections from Amritsar, then we might also ask the same about Smriti Irani.

The acolytes have not experienced a single day of her capabilities and already pronounced her a great choice and a success. On what basis is she being touted as the next best thing? Had this 'out of turn' assignment been given by another government, or more likely another politician, it would have been seen as a favour, or a handout.

It appears to me that Mr. Modi's speeches are still resonating in the minds of the fawners. Priyanka Gandhi had asked, "Smriti who?" while campaigning for Rahul Gandhi in Amethi. Now they are gloating, "Smriti who? Take that. Our new Minister for Human Resource Development!"

Is this going to be one big round of vengeance politics? We'll get to that later. First, a few points about the 'Let's save Ms. Irani' movement, which reveals that the BJP supporters are still speaking with their mouths full of the May 16 ladoos.

• She is young, and that is an advantage. But, is she the first young person to be in a position of power? And if youth has such a premium attached to it, why have anyone above 40 in the cabinet?

[Incidentally, the PM has followed the RSS diktat of not having anyone over 75 in his ministry.]

• She is not the only woman. The oldest, Dr. Najma Heptulla, has been given charge of the Ministry of Minority Affairs. Why are we not discussing this — a senior person with experience, however titular (mainly Deputy Chairperson of the Rajya Sabha) given a token portfolio, which does no justice to her education, and puts her into a convenient 'Muslim' pigeonhole? Sushma Swaraj has got the plum External Affairs, which is great, except that she would not have settled for less and this was one way to curb dissent.

So, how is raising doubts about Smriti Irani sexist? She should anyway be the last person complaining. Did she not make a huge noise on Times Now, insisting on addressing Priyanka Gandhi as Mrs Vadra? Was she not aware that quite a few women choose to retain their maiden name?

And although I have no issues with her work experience as a TV actress, if we are talking sexism, would she be able to explain the misogyny inherent in the saas-bahu serials she became known for and which her party promoted her as during campaigns?

She has in the past experienced slurs, as have others. This is wrong. But right now, anybody who calls the issues raised about her lack of qualifications misogyny should ask themselves what they had to say about those who have been dismissed as running kitchen cabinets? And how can we forget the incessant references to "the former Italian waitress" when referring to Sonia Gandhi? Think about Jayalalithaa, Mayawati, Mamata Bannerjee, and recently Shazia Ilmi. How many have called out the misogyny in their cases?

• It is amusing that quite out of the blue, education has become irrelevant. Smriti Irani has completed her 12th standard. She comes from a middle-class family, and was a Miss India contestant. Therefore, to try and make this into an elite battle against her is disingenuous and churlish.

We have not spared the most educated politician in the world, Dr. Manmohan Singh, when we felt he did not deliver or was making the wrong moves. Why should we use kid gloves for somebody who has not even assumed her duties?

Did people not constantly make jokes about the rustic Lalu Prasad Yadav? Did anybody take umbrage to it, arguing against sexism, class, and several other isms?

The HRD Ministry is a vast area, that requires vast knowledge of the education field. It is not something you can leave to technocrats to deal with. To coddle her by suggesting that the details can be outsourced to those with expertise would be misogyny, to see her as a rubber stamp.

If anything, Smriti Irani and her fans are the elite, rooting for the well-spoken (read English-speaking) one. It is the privileged clique anointed by the 'man of the moment'. This includes TV channels drooling over her 'victory'. 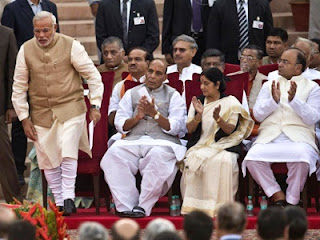 Loss as victory is nothing new. It is used as a slap on the face by the educated illiterates. This brings us back to the politics of vengeance. During her campaign in Amethi, when she was faced with the "Smriti who?" comment, the then PM-designate himself brought it up in one of his speeches. The arrogance rankled him (who had called a politician's wife his "Rs 50-crore girlfriend").

So, shall we say Ms. Irani is rewarded for standing up against the dynasty children?

Maneka Gandhi who has been pretty much out of the circuit has been given charge of the Women and Child Welfare Ministry. That she is Sonia Gandhi's sister-in-law is a loud enough message.

Sanjeev Baliyan, an accused in the Muzaffarnagar riots, and Uma Bharti, an inciter during the 1993 riots, have both been given cabinet berths.

Of course, as they say in some parts, it is time to move on. These reminders don't suggest that. The presence of the VHP, RSS, and sadhus at the oath-taking send out strange signals.

As citizens, we want good governance. But each person has a duty to be vigilant. If we've done it in the past, there is no reason not to continue to do so.

It would help, though, if those who have made freedom of expression their business do not cash in on every opportunity. You have a voice. Use it well. Do not use it to promote yourself as a martyr. It sounds hollow when compared with those who are left to silently rot in prisons, or whose silence is bought.