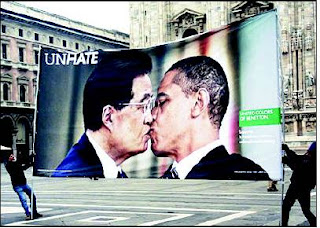 How can you ‘unhate’? Is it like undress or undo? Benetton is known for its use of stereotypes to display its supposed egalitarian stance. Where money speaks who would anyway care about colour or race? The new campaign has images of people in positions of power, supposedly belonging to different ideologies, getting close and comfortable in a liplock. How does a kiss solve problems?

If we take it literally too, lust does not necessarily overcome hate. It could well result in more hate if it is embedded, for together with that emotion will be the added baggage of guilt: I slept with the enemy. People are also known to wreak vengeance through the sexual route. If we do not wish to get that far, then there is the image of social niceties. A ltitle peck, even on the lips, could be seen as a mere gesture, an acknowledgement of existence and being part of the herd. There is a good deal of it at gatherings, besides the overdose of socialite don’t-mess-my-makeup air-kissing.

The fact that Benetton desisted from using images of the Indian and Pakistani leaders due to cultural sensibilities reveals that it is steeped in these archetypes. There could have been a backlash, but it would not be so much about cultural sensibilities as it would for diplomatic reasons To force-feed friendship for commercial gains is pretty disgusting, especially if you know precious little about how the particular governments wish to deal with each other.

As I said, where money talks, the company need bother about bringing ideologies together. Major American companies have outsourced their technological marvels to China, where the workers are paid a pittance and labour in terrible conditions. So where does free enterprise and Communism clash here? One feeds the other. 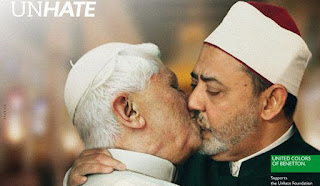 The same goes for religious figures. The sheer muscle power of these organisations put them at an advantage. They have millions of people who will follow them for no reason other than that they are seen as emissaries of some god. They have not been able to control any undesirable activities within the fold or even within the hallowed precincts from where they operate. And chances of them being quite willing to put up Benetton’s rainbow-coloured banners to promote peace and sell a few threads are not quite as remote as it might seem. There has been sharp reaction from the Catholic Church and the company has decided to remove the Pope’s image with the Egyptian Imam.

Bringing the Israeli and Palestinian leaders in a digital photo-snogg is unlikely to solve the political issue; if anything the images draw attention to the differences.

So, let’s just not play this social consciousness banner game which follows the slapstick prototype rather than anything remotely sensitive to bonhomie. Get the slumboys and girls who work hours to make it happen. No, wait. That too might end up as slcik marketing gimmick. Nothing is left untouched. They’ll dig the muddiest places if there is promise of gold.

Let’s just continue to ‘hate’ without having to dress in ‘unhate’.


- - -
Note: I have used the images because the company cannot titillate and then choose to selectively censor. Besides, the more important issue is not of the photograph but the larger picture of why the need.

"We cannot but express a resolute protest at the entirely unacceptable use of a manipulated image of the Holy Father, used as part of a publicity campaign which has commercial ends.

"The secretariat of state has authorised its lawyers to initiate actions, in Italy and elsewhere, to prevent the circulation, via the mass media and in other ways, of a photomontage used in a Benetton advertising campaign in which the Holy Father appears in a way considered to be harmful, not only to the dignity of the pope and the Catholic church, but also to the sensibility of believers."

While the al-Azhar mosque did denounce it, the Imam was not quoted.

The company immediately started tearing down the posters. Now, had the objection been raised by the Imam or his emissaries, it would have mmediately been branded as an over-reaction and muzzling of freedom of speech.

Is Barack's Butting Again?
“I want women to be liberated and still be able to have a nice ass and shake it”
- Shirley MacLaine
But, do we want men to watch? President Barack Obama sure likes to stand behind women. Here he is with Australian Prime Minister Julia Gillard in Canberra on November 16: 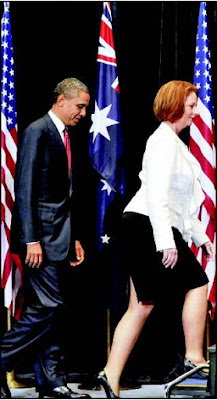 Two years ago, his hindsight was evident when he looked back at a Brazilian girl under the watchful eyes of Nicholas Sarkozy (not in this picture): 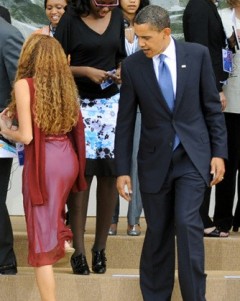 Of course, there was a debate then about the 'lying' pictures. Of course, they can lie. But I am curious why other heads of state, friskier than Obama, have not been so captured.