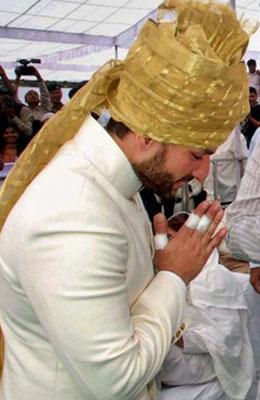 Just suppose Saif Ali Khan had refused to be anointed the new Nawab of Pataudi and instead gone to the district and nearby villages, spoken to the people and said that he would continue with the work in the charitable hospitals: would there have been turmoil? The people there vote for politicians; it is the government that provides the basic infrastructure, the roads, the health plans, the schools, the water, the electricity.

Saif had said that this business of royalty is not applicable anymore; India is a democracy. He should have stood his ground. We do still have these princes around, especially in Rajasthan, transforming their palaces into fancy luxurious hotels while playing on public sentiment. Some enter the political fray and while in Parliament they are the epitome of modernity, what with their western education, but once they reach home turf they are quite willing to be addressed as “Your Lordship”. They get married mostly within the clan or with other royal blood and we still see these princesses, graceful rajkumaris, in special editions of glossy magazines. Even if these royals are running restaurants or designing high street clothes or, of course, promoting the gay cause dressed in pink feathers on their turbans, they still get this halo treatment.

Many bring out their antiques and heritage garments in the name of promoting tradition. This is self-promotion. Not one of them has the courage to shun the pomp and pageantry. To make it seem that it is the junta that wants to keep the symbolism alive is only a small part of the picture. Does the junta, often quite conservative, have a say when these rajahs and nawaabs indulge in their extra-curricular activities? Is the junta allowed to voice an opinion when there are fights over wealth in these regal families? Who represents the junta to anoint the princes? The panchayat? It is a political body. So, these men are just ensuring a constituency.

Since Saif had clear opinions about Indian democracy, he should have not gone ahead with the pagdi (turban) ceremony. It is too soon after his father Mansur Ali Khan Pataudi’s death, anyway. If this is a democracy and he was not ruling, why the hurry to fill the space?

Someone tied a turban and he now has a title. It means nothing, he believes. It would be a fine initiative if he stepped up and said that he had respected the views of the people (if indeed there were such views) and now as their prince they must respect his and follow the government directive. Many of these princes talk about how they are upholding both tradition and modern values, when all they are doing is ensuring that Godiva chocolates are placed at bed-turndown time in the rooms that have an odd ode to culture with a miniature painting or ‘theme’-based furniture and upholstery.

And the media that goes on about the new India, the India that has come out of the stereotype, has been covering this ‘small’event with television interviews on the coronation. If you want the rights of a democracy, then do not make a farce of what it does not stand for only because you get to see blue blood. Of course, the channels will also benefit by getting the ads of the 'prince' endorsing a vest.