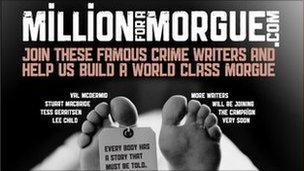 Forget a chair named after you at a tony university. Several dead bodies can soon claim to have been at your place if you have the honour to win the online poll for the best crime writer. Ten authors have signed up for the ‘Million for a Morgue’ campaign. Those who get the most votes will have a morgue named after them. Dundee's Centre for Anatomy and Human Identification (CAHID) in Scotland needs £2m; it has contributed half the amount. The rest will come from the vote, where each voter chips in £1. This is to facilitate a special embalming facility for research.

I assume the writers have decided to participate out of a genuine need for academic excellence in the field of such scientific endeavour. One of them has probably done it out of gratitude. Val McDermid often tapped Prof. Sue Black of the Centre for her own research. As she recalls:

"I remember asking her what a body would look like once it had been in a peat bog for 200 years. There was a moment's silence on the phone and then she said: 'A leather bag with a face on'. And that was perfect because that gave me an image I could put in my book."

We can take this further and have restaurants, stadia, bats and balls, strip clubs, even a specific love-making position named after authors. I can’t wait.

It raises the question about what could motivate readers to vote. Would it be like any popular poll where you choose your favourite crime writer? Or, since the purpose is not a secret, will the person contributing the money be interested in the Centre’s plans and therefore keep this in mind and choose an author whose work is the most macabre and deadly?

What if after winning the author has second thoughts about the naming? Would that not amount to letting down the readers who voted? Do writers crave fame and not mind such an honour? But, are not death and murder the territories they stalk in their literary endeavour?

However, it might be a good idea if the morgue is named after a character from a thriller. Better still, it could just be called ‘Crime Writers’ Mummies’.
By Farzana Versey at 11:18:00 pm