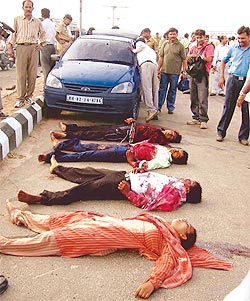 Yet another encounter by the Gujarat police has been termed as a murder in cold blood. The three-member Gujarat High Court-appointed special investigation team (SIT) probing the Ishrat Jahan case of 2004 has unanimously concluded that the Mumbai college girl and her three aides were murdered by Gujarat officers who later staged a fake encounter.

This could spell trouble not only for the Gujarat police officers, but also for the central intelligence agencies as they are believed to have faked inputs that led to the encounter and open Narendra Modi’s government to the charge of shielding the officers involved.

“Three senior IPS officers, nominated by the Centre, refused to head the Ishrat SIT,” said advocate Mukul Sinha who is representing the family of one of the victims. “This is clearly to save the skin of senior central IB officials involved in the case.”


One would have thought that the conclusive pronouncement on the case would have been a sort of wake-up call. Instead, my mailbox had a note from my rightwing party contact who mentioned it in passing. The real issue was this:

I had Googled "Amit Shah and CBI" around 11am on Nov 22. There is practically zero coverage of the strong indictment of CBI by the Supreme Court. But you will see a lot of the earlier articles when Amit Shah was arrested. This is what is called a secular coverage by the media of events in Gujarat. And those who damn Narendra Modi always talk about his supposed image.


It was 12 pm when I read the email. I did my own search and sent a cached copy of the page that had several references with this note:

An hour after you googled, I did so....and copied below is just a portion that showed up! The reports are all four days old. I do know that the media is selective in reportage - from both sides. Just thought I'd share what I saw. Even if your search has prompted this change of heart on the part of Google, it still does not take away from the coverage.


Why must a crime not be seen for what it is? Why do we need to play politics when politicians are already doing so? Amit Shah will get justice sooner than one expects.

What about Ishrat? I will reproduce yet again what I had written earlier this year because we suffer from amnesia and the characters seem to have changed:

It is the law that is now returning with an old unresolved case.

Giving a new twist to the Ishrat Jahan case, Satish Verma, a member of the Special Investigation Team claimed before the Gujarat High Court that the 2004 killings could have taken place in a fake encounter.

Verma, a senior IPS officer, who is part of the three-member probe team set up by the high court last year, also said that a second FIR with regard to the encounter needs to be filed. “The illustrative evidence brings out well founded allegation of a fake encounter. This is different from the version contained in the FIR.”


This is what happens when cases drag on. While some of us laypersons have gone through several reports and it was obvious there is no room for any idea other than a fake encounter, given the available evidence, all we end up with is another ‘twist’.

These were my views over two years ago about what the inquiry had revealed:

Ishrat Jahan, the 19-year-old student of Mumbai’s Khalsa College, and the three others who were proclaimed Lashkar-e-Taiba operatives on a fidayeen mission to kill chief minister Narendra Modi, were killed one day before they were actually shown as killed in a police encounter.


On June 14, 2004, the then police commissioner and two senior officials and their boys dubbed these people LeT operatives only to get promoted and to cosy up to Narendra Modi. The others were two 'Pakistanis', not confirmed by anyone, and one Pranesh Pillai alias Javed Shaikh. Ishrat was last because she had witnessed the murder of the others. Pranesh was her boyfriend. She was dragged in front of the car and shot from close range. The report stated:

The police then put her college identity card around her neck and her purse was placed in the boot of the car, which was “uncanny’’. It also declares that Johar and Rana were Indians. The policemen had also dragged Amjad’s body to the road divider alongside the car and placed a 9 mm gun in his hand—to show that he had been killed in action.


The magisterial inquiry, based on scientific evidence that relied on the digestive food remains in the stomach and the state of the four bodies, concludes that all the bodies at the site had rigor mortis showing they were killed several hours earlier.

Should we merely let the issue die at the level of ‘wanted promotions’? There were other encounter killings at the time. Modi himself transferred senior officers to save them. There is obviously the communal angle, and incidentally Pillai’s father has maintained that his son and the others had been framed.

A few other questions need to be asked:

Why were these findings not available earlier when the families have been crying foul from the very start? Given that none of them had any criminal record, the judicial system is supposed to take some action soon.

Cut to February 2011. Will the cops do anything about Verma's revelations – the fact that the weapons do not match, that the intelligence input is not on record, that the deceased was being chased, that the vehicle was not stopped?

Verma told the High Court that “there are two possibilities in the case; one is that four people (who got) killed in the encounter had come to kill Gujarat Chief Minister (Narendra Modi), and the other is that they were killed in cold blood by the police…There is a possibility of the second one (having taken place) irrespective of the first one.”


This is a dangerous comment for it assumes that Ishrat and her colleagues were terrorists. If that is the case, then the police can use their murders as a defence tactic. There is no law that you cannot kill a criminal in cold blood if s/he is seen as a real threat with a plan to get rid of the chief minister. The job of the SIT is to investigate the encounter deaths and prove if there was any motive on the part of the persons killed. Why bring in possibilities here?


True. But is it possible for the investigative team to operate independently when they are in the lion’s den? How many witnesses will co-operate? Will their phones not be tapped by the state government? Instead of innuendo, perhaps they might like to specify how Delhi is interfering. Here we are dealing with politics at cross-purposes, with the UPA at the Centre and BJP in Gujarat.

The fact that there is some dissonance within the SIT made the court state:

“Decisions should be taken after discussion with all the members. If any member of SIT expresses dissenting views, it would be open for the SIT chief to proceed in accordance with law.”


The SIT is to submit a progress report every two months.

So, it is back to school, to where it all started, the painful process of what law and according to which Section and the possible loopholes.

Today, November 22, 2011, as I write this we are told that there will still be questions. I do not doubt it. Her mother should go slow on those celebratory ladoos. We are dealing with the Establishment that has always tampered with truth.

Here’s my first other take on Ishrat as the pretty dead.