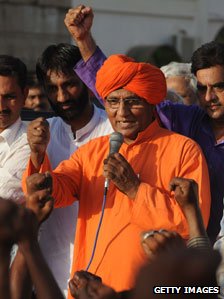 What can be worse than Swami Nityanand video clips in uncompromising positions? Swami Agnivesh in Bigg Boss. The whole promos-on-television idea has gone completely haywire – every film is pushed till it kills or dies. The same applies to people. While news channels have fake courts to let the same bunch of people come clean and the others have a more circuitous manner of doing so, entertainment channels are now happily permitting this.

It is completely ridiculous. This season’s Bigg Boss already made Shakti Kapoor look like a saint. Now we have a qualified Swami who will enter the fray. Had he said it was just for another experience or not even tried to explain his stand, it would have been okay. I watch the show between other things and to see him do the dishes, rustle up tea, brush his teeth, walk on the treadmill, relax in a bright pink and yellow room, and wake up in the morning, peeping from under a blanket looking on indulgently as women and men in funny clothes do a jig, might have been as much fun as biting into a too sour slice of fruit. But the honourable Swamiji has got a higher purpose. Of course, everyone told him not to do it, but after watching some episodes he thought he had to create awareness:

“The girls inside the house don’t seem to have any social responsibility. I want to make them realize just how many girl children are killed in the womb and how many women are burnt alive in the name of sati.”

Nobody watches shows such as this to get lectures and the participants probably know about these issues – not one of them looks like she’d fall into her husband’s funeral pyre or kill her female child. And what will he teach the guys? These people are not serving time in jail that they need to be reformed, however shrill and irritating they may be. But, then, it is the ‘spontaneous’ script. The swami is going with his own script, too.

“In the past a lot of people have tried to tarnish my image. I will take this show as a test. I shall maintain my integrity and remain transparent inside the house. I am going to the house with a selfish motive. Like former President of India, APJ Kalam says, I want to ignite the youth through this show. The entire society has to come forward.”

I am afraid, the so-called honesty about selfishness is convenient. Maybe he will tell us he did not fly Business Class? The producers of the show have given him a platform because it will help their TRPs. Just imagine a saint among sinners, that too one who wears a saffron robe but is a secularist. I can already see the ‘aware’ Pooja Bedi welcome him as an activist she has always admired and Lakshmi the eunuch – in her past interviews and public appearances she always maintained a regular profile but on this show keeps clapping like any roadside hijra because that will get more attention – who will want to be his student. I can already see that many of them will not change their mode of dress (low slung jeans and cleavage-revealing blouses) and Agnivesh will not comment on these because he will state he believes the atma (the soul) is what matters.

I wonder why no one looks at A. Raja’s soul.

“I am not doing the show for money. I have never been a greedy guy, I was a professor of law in Kolkata when I left everything and came with one aim-- to change the society. Bringing about a change is my sole purpose and I think this is a strong and powerful medium by which I can spread my message. By doing this show I want to pass on the message to our youth to come forward and bring about a change. I was very happy when I got this offer.”

Is he doing this for free? Greed is not restricted to monetary gains, and just how much does a law professor make? Many of these people who ‘give up everything’ are in fact offered a cushier life trying to change others. It is easier than changing oneself. He just wants to be on TV in another format to show his range. And what is his swamihood all about?

“I will teach them yoga and meditation and will give them love. I have seen 2-3 episodes where they have been fighting but that doesn't bother me as they are better than the members of parliament who throw chairs, break micro phones and abuse each other - that's more embarrassing.”

Give them love? Had any other male said it, there would be a huge noise. This man sounds really too patronising. And why did he not try and do something about what happens in parliament?

The worst possible thing he could say is this:

What does he mean by these people? And what is he trying to convey through the comparison with the Maoists – that they are difficult to deal with? That he was in a risky situation? This goes against his own support for the movement.

What a dramebaaz. Anna’s People’s Movement has been one big joy ride for its core group, and each a bigger actor than the other.

If only Bigg Boss had a couple of Kapils on the show, too. Sibal and Maharaj.
By Farzana Versey at 7:43:00 pm