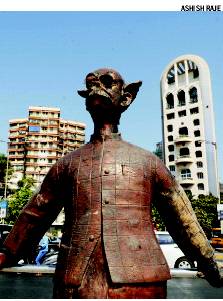 Where are the pigeon droppings? Do we spare anyone? Can the ordinary person be a holy cow?

This sculture at Worli Sea face is based on cartoonist R.K.Laxman's Common Man, who whimsically looked on as politicians fought for power and pelf.

We woke up to him every day, his silence his statement. Even those who did not live his kind of life were drawn to him.

There's a flipside to this. Such empathy can be conveniently put on a pedestal. It's not surprising that Anna Hazare had garlanded it one of his outings.

However, what would make people want to vandalise this symbol of 'no one', so to speak? His arm was broken; glasses broken. Was it living up to its identity of being broken, destroyed a bit every day?

It is a public place. Has it hurt anyone? Who would want a piece of spectacles or a fibre-metal limb?

We see that even sculptures at heritage sites, especially of women, are strategically damaged.

Is it anger? At whom? I think it is oneself.

And as the sculpture is taken away to be laid to rest, we know that by such destruction the humble common man has got his martyrdom. 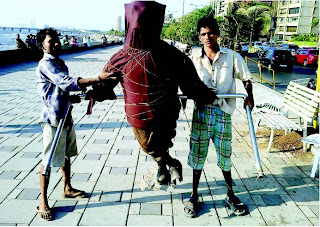