Nehru, Ambedkar and a Cartoon 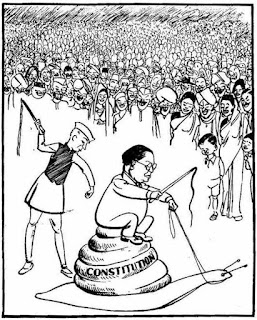 Cartoon controversies have a way of becoming jokes themselves. The latest is in a textbook by the NCERT (National Council of Educational Research and Training). The government is trapped. Here is why.

As you can see, Dr. B.R.Ambedkar is sitting on a snail. Jawaharlal Nehru, the prime minister then, is standing with a whip. Apparently, there is accompanying text in the book that blames Ambedkar for the slow pace of the Constitution that he formulated.

There has been the usual house adjourning, shouting, resignations, apologies. Do we need a committee inquiring into this, or do we need a full-fledged ministry?

Sketched by renowned cartoonist Shankar in the 1960s, the cartoon has been part of the NCERT book since 2006. Today, MPs waved copies of the cartoon in Parliament and said it insulted both leaders.

Did Shankar sketch this in the 60s? If so, the Constitution was well in place before that. (It transpires that it appeared in his weekly in 1949, which seems more appropriate.) The problem is not with the Constitution, but the execution of what it lays down. Therefore, this is an insult of the Constitution. It is rather amusing to see a crowd of ordinary folks smiling broadly at this display of Nehruvian aggression. The cartoon insults them, too, for it assumes that they the lowly who will get their rights only when things are whipped into shape. There is no concern for dignity of the human being.

Does it insult both leaders? I’d say it backfires on Nehru. He looks more like a horse attendant, than a trainer. Besides, standing behind with a whip, there appears to be an element of Brutus back-stabbing. Ambedkar remains a jockey steadfastly steering.

I’d definitely see it as misconstruing history, although young people these days have access to other avenues of information and such cartoons and derogatory references do not tarnish the work done by people like Ambedkar. Note: I use the term work and not image.

The politicisation has predictably taken on a high caste vs. Dalits hue. It will fall flat. Mayawati has just been exposed for her indulgences, spending Rs 86 crore on renovating her house. Despite rising to power, and I do commend her for managing it against odds irrespective of her personal whims, she has shown scant regard for the Constitution. She has misused Ambedkar’s name for personal glory and treated his persona as her personal fiefdom.

Our political leaders should have found other ways to deal with it. But, no. This is the age of shoo-shaa as we say. Waving copies of it only drew attention to something that most of us would not have noticed. Now, sides will be taken. As I said, the controversies become the jokes.