Friends and Foes: The Case of Rajat Gupta 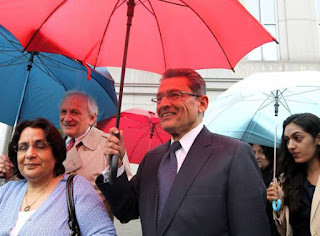 'Friends of Rajat Gupta' is not the sort of thing you’d read about, much less imagine it as a movement.  But in the closed world of the famous rich, protecting one of their own is crucial in some ways to their own reputation.

The case is pretty simple. Gupta, former head of McKinsey & Co. as well as a director at Goldman Sachs and Proctor & Gamble, gave away vital information to fund manager Raj Rajaratnam involved in insider trading that earned him what we in India would call 'oopar ki kamaai' (in the literal sense topped earnings, euphemism for illicit money).

On Monday, Gupta's trial began in a Manhattan federal court. Those who understand financial skulduggery and the legal machinery that might pin it down believe that the courts won't be able to prove a thing, unless Raj Rajaratnam who has been charged guilty last year testifies. With evidence.

Will the Friends of Rajat group play any role? Is their testimony of his character of any consequence? Since the trial is on and the case is subjudice, is their public display of support not against the law and tantamount to interfere in the legal process?

Mukesh Ambani, Adi Godrej and Deepak Chopra have been certifying his impeccable credentials.

Dr. Chopra, who is on the witness list, has said:

“I have known Rajat Gupta for 25 years and am pleased to call him my friend. Rajat has devoted many hours working in fields that are close to my heart -- particularly in promoting global health through the eradication of infectious diseases."

Without getting into the merits of the case, I'd like to pose a few general queries that could apply to any such case, in another country or India:

The open letterchallenges the press and public portrayal:

"The REAL Rajat known to us over several decades is completely at odds with the public narrative. To our collective knowledge which spans a lifetime and covers hundreds of friends Rajat has:

2-been judged, without a chance to tell his side of the story; and

3-been mischaracterized by people who have little or no knowledge of him."


Most of these people have not worked with him. What we know of people through personal interaction could be at odds with their professional persona and aspirations in an entirely different environment.

The 'Real' can also be a perception.


1. Ethics is abstract territory, more so in the realm of business. A few 'tips' to a friend might be seen as ethical in the narrow sense. It would be a bit strange, though, to imagine that a Wall Street veteran wouldn't know how it might be used.

Did he benefit from it? Let's just say that if there's nothing like a free lunch, then his luncheon was a large spread, at the very least. It could be a symbolic gesture or symptomatic of a malaise.


2. He is given an opportunity to put forward his version. It probably causes consternation that this is being done in a court and not across the table, or under it.


3. People who are under the scanner for misdemeanours are judged on those and not based on their history.


It is arrogant for public figures to arrogate to themselves the right to dismiss characterisation based on their 'social' knowledge of a person. Besides, philanthropy is often refuse if not a refuge.

It bespeaks of scant respect for law, for propriety, and even for ethics.

Rajat Gupta may or may not be innocent, but this sort of gathering of support is an indication that perhaps there is more at stake than one man's tip-off to a hedge fund manager.

It is particularly disconcerting because the Occupy Wall Street movement that spread throughout America brought people to the streets who had suffered from just these kinds on insider deals.

Is Gupta a victim, a fallguy? Possible. But the lobbyists will speak up for him. And they might win because the good American Indian is vital for politics. A bit of whispered trade secrets could well be hushed up if the kitty is replenished for some loose 'change'
- - -

A detailed look at The Wall Street Fall
By Farzana Versey at 8:36:00 pm