Everybody needs to use the toilet. Every day. But in India, we exaggerate it. By doing so we do not give it importance; we merely magnify it in the lab under a microscope. More appropriately, we bring awareness to people who probably have a bidet, use perfumed toilet paper, and have a warm jet of water to clean up with.

National award-winning actress Vidya Balan is now the brand ambassador for the sanitation drive. This is the brainwave of Union Minister for Rural Development Jairam Ramesh, who said:


"It is going to be a two year programme. She's had a dirty picture in reel life, but this will be a clean picture in real life. I think she will help in making sanitation a national obsession."

This is a silly comment, the transposition of dirty and clean. It is also a cheap gimmick. Ms.Balan’s giggle act and repetitious references to the film was bad enough, now a central minister wants to ride on it. There are people who have to shit in the open, in fields, in dug-up holes, and sewage even from hotels near water sources floats into our rivers and seas. Those people would have liked to have such facilities long ago. What does the minister mean by saying she will make it into a national obsession? The film became a publicity-geared obsession only for those involved. The others bought tickets, whistled, got off and moved on.

Using public facilities is a basic need. What is obsessive about it?

For Vidya Balan it is just one more satellite benefit for The Dirty Picture. She does not have to say it. Instead, the words are typically managed:

“It's an honour for me to be the brand ambassador for the sanitation drive and like Mr Ramesh just said, it needs to become a national obsession and I am going to do everything in my capacity to make sure that the message is taken across to every person.” 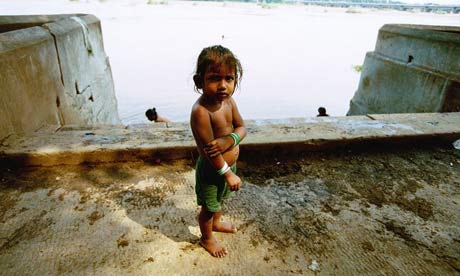 We look away, hold up our noses. Vidya Balan is doing it out of “conviction”, she says. Every Indian she reaches out to will remember her as she lectures on sanitation. They will probably have an inauguration in some cleaned up poor locality. After that, there will be clips on what to do and how to keep your environment free of disease on television.

The municipalities and panchayats should be regularly visiting these places. They ought to involve key workers from those areas, people who belong there, have suffered. I know that with Ms. Balan it is possible to get some industrial houses to shell out money. Yet, it won’t really reach out unless the infrastructure is in place.

I am waiting for someone to compare her to Mahatma Gandhi the minute she holds up a broom in her hand. It’s been over six decades when he started it. Has it made any difference? It did not then. It will not now. Except to honour the celebrities for their sanitised concern and conviction.
By Farzana Versey at 8:37:00 pm